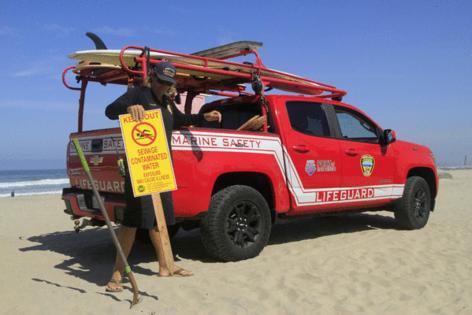 SAN DIEGO — Adam Wraight pulled a blue sewage "warning" sign out of the sand near Imperial Beach Pier on Thursday morning, replacing it with the more ominous yellow and red placard telling beachgoers that waters were officially closed.

"It's an active spill," explained Wraight, a marine safety sergeant with the city's lifeguards. "A big pipeline broke."

Shorelines from the border up through Coronado were closed to swimming Thursday as the result of a pipeline that ruptured in Tijuana near Smuggler's Gulch over the weekend. Sewage has been spilling over the border into the river's estuary for days, but it's just now making its way to the ocean and floating up the coast on surging northward currents.

The situation will likely persist into next week, when public utility workers in Baja California are expected to complete repairs, according to federal officials in San Diego.

"That pipeline handles 80 percent of the wastewater generated in Tijuana. It's huge," said Morgan Rogers, area operations manager at the San Diego field office of the U.S. Section of the International Boundary and Water Commission.

More than 135 million gallons of treated and raw wastewater have spilled over the border since Saturday, with roughly 25 million to 30 million gallons more coming every day. Most of that has flowed through the Tijuana River, after the pipeline break forced officials to shut down a diversion system that pumps water out of the main concrete channel.

Another roughly 10 million gallons a day of raw sewage are being rerouted to the South Bay International Wastewater Treatment Plant along the border in San Diego. The situation is putting some strain on the plant, which is now processing more than the 25 million gallons a day that it was designed for, Rogers said.

"I think we could probably sustain 35 million gallons a day for a few weeks until the repairs are done," he said. "We'll probably have some cleanup in the plant to do, but no real damage.

Summertime beach closures in the South Bay have become more prevalent since county public health officials rolled out a new DNA-based test for ocean water quality in May. Beaches saw a wave of closures earlier this summer when conditions were far less severe than under the current sewage spill.

The City Council voted unanimously this week to approve a ...Read More

MINNEAPOLIS — Don Wyse's field of winter barley used to be mostly empty in the spring.

Eight years ago, just a tenth of the grain would survive the winter in this experimental field in St. Paul. But this year, after ...Read More