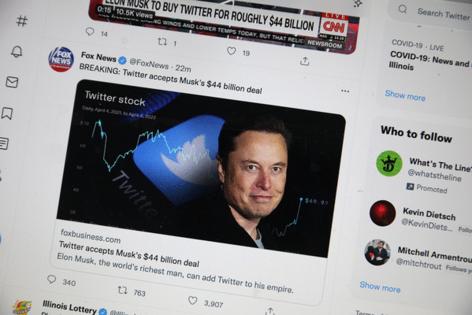 Twitter Inc.’s lawsuit against Elon Musk over a canceled $44 billion buyout of the social media platform is set for a five-day trial starting Oct. 17 in Delaware, with the billionaire filing his defense and counterclaims under seal.

Meanwhile, Musk’s legal team also filed its formal answer and counterclaims to Twitter’s suit over the teetering transaction Friday, but the response was sealed. Under chancery court rules, Musk will have five days in which to produce a redacted version of the filing.

McCormick agreed earlier this month to fast-track the trial over Musk’s failed bid to acquire Twitter for $54.20 a share, which he nixed over claims usage statistics for the social media platform are inflated by spam and robot accounts.

Twitter claimed Musk, the world’s richest person, was dragging his feet on setting the schedule and lobbed a letter onto the court docket without sharing it with his opponents. McCormick, in her eight-page order, warned both sides that any pretrial information exchanges “should not be requested or withheld in an effort to inflict unreasonable demands on or extract unreasonable benefits from the opposing party.”

Twitter’s lawyers say they’ll need only four days to prove Musk is misusing questions about spam and robot accounts as a pretext to walk away from the deal. The company said it had turned over all its information about those accounts and it is seeking to force the billionaire, who co-founded Tesla Inc., to consummate the acquisition.

Musk counters in court filings Twitter’s handover of the so-called bots material hasn’t been robust and the company’s mishandling of that data provides a legitimate basis for his cancellation of the buyout.