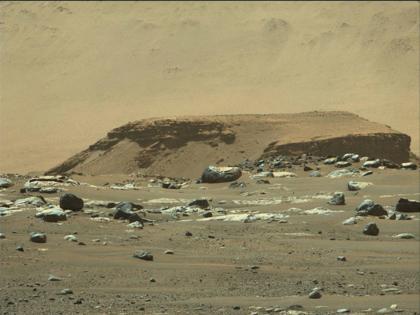 PHILADELPHIA — Since September, the Perseverance rover has been picking along an ancient river delta on Mars, its robotic arms reaching out with whirling steel drill bits to core rocks, scoop soil and suck small amounts of the red planet's atmosphere into titanium tubes.

The plan, under NASA's Jet Propulsion Laboratory, calls for a sci-fi symphony of technology that includes launching another vehicle to Mars to bring the unsterilized samples back to Earth, drop land the samples in Utah, and shuttle them to a yet-to-be built secure facility by 2033.

There scientists will start testing for signs of ancient microbial life from about 35 samples weighing in total about one pound. The goal is also understanding the planet's geology and climate, as well as preparing for people to one day step foot on the red planet.

But the plan gave some members of the public who attended an open hearing on the plan a bit of intragalatic agita, especially in light of the recent pandemic. That includes a retired Federal Aviation Administration engineer from South Jersey who wonders what problems an unsterilized microbe from Mars might present.

NASA is conducting its Mars Sample Return Mission with the European Space Agency and calls it one of the most meaningful missions it has undertaken.

"We also believe this to be the next logical step in our quest to eventually land humans on the surface of Mars," Thomas Zurbuchen, an astrophysicist and head of science at NASA, said during a virtual public presentation in May. The samples collected from the ancient river delta Jezero "are thought to be the best opportunity to reveal the early evolution of Mars, including the potential" for life, Zurbuchen said.

Some members of the public have wondered about the remote possibility that something in those samples could be alive or present a biohazard. They also wonder whether China, which has announced a similar project, and private companies will have as rigorous safeguards as NASA. Elon Musk has been enthusiastic about plans by his company Space X to explore Mars, though there is no time frame.

Public comments on NASA's initial presentation are now closed, but a draft of an environmental impact statement on the mission is expected in the fall with another chance for the public to weigh in.,

The environmental impact statement will examine implications for both Earth and Mars regarding "recovery efforts with respect to natural, biological and cultural resources" and "impacts to the human and natural environment associated with loss of containment of Mars sample materials."