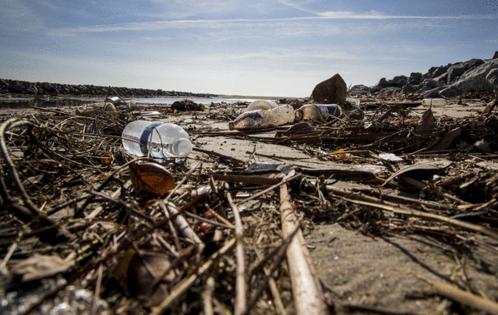 LOS ANGELES — Striking a blow against a pernicious form of pollution, California lawmakers on Thursday passed the nation’s most far-reaching restrictions on single-use plastics and packaging, with Gov. Gavin Newsom expected to sign the bill Thursday.

The legislation heads off a November ballot measure that many lawmakers and the plastics industry hoped to avoid, and it puts California at the forefront of national efforts to eliminate polystyrene and other plastics that litter the environment, degrade into toxic particles and increasingly inhabit human blood, tissue and organs.

Sen. Ben Allen, D-Santa Monica, has tried for years to get state legislators to tackle the growing plastic pollution crisis but has faced opposition from the plastics industry and some food container manufacturers.

Late Wednesday night, the California Assembly passed the bill 67-2, with the Senate passing it Thursday morning with 29 "ayes" and no “nos.” Backers applauded.

“With this legislation, California continues its tradition of global environmental leadership — tackling a major problem in a way that will move and grow markets, create incentives for investment, and give tools to other states and countries to help play their part in this fight,” said Allen in a statement.

For the past six months, a team of roughly two dozen negotiators have hammered out language designed to reduce plastic, increase recycling and shift the economic burden of waste disposal to plastic producers and packagers — all the while trying to find language that would satisfy those producers, as well as waste managers, packaging companies and environmentalists.

The bill requires that by Jan. 1, 2028, at least 30% of plastic items sold, distributed or imported into the state are recyclable. By 2032, that number rises to 65%. It also calls or a 25% reduction in single-use plastic waste by 2032 and provides CalRecycle with the authority to increase that percentage if the amount of plastic in the economy and waste stream grows.

In the case of expanded polystyrene, that number needs to reach 25% by 2025. If the number isn’t hit, the ubiquitous, hard-to-recycle foamy plastic will be banned.

“It’s a de facto ban,” said Jay Ziegler with the Nature Conservancy, noting that current recycling rates for polystyrene are in the low single digits, making it improbable that a 25% recycling target could be met in three years.

Plastics waste has become an increasing scourge nationwide as plastics packaging has become ubiquitous in groceries, fast-food outlets and other businesses, and consumers — especially during the pandemic — have embraced take-out items delivered in single-use packaging. The resulting waste pollutes marine environments and clogs landfills, in part because of challenges in recycling plastics, including China’s decision to end imports of plastics waste several years ago.

LOS ANGELES — Even today, as California struggles with severe drought, global warming has doubled the likelihood that weather conditions will unleash a deluge as devastating as the Great Flood of 1862, according to a ...Read More

CHICAGO — The Great Lakes region is enjoying another year of lower water levels and wider beaches.

July water levels on Lake Michigan and Lake Huron are down more than 2 feet from 2020, a year of near historic highs ...Read More

Amazon.com Inc., Oracle Corp. and other data providers pressed by a group of U.S. lawmakers about how they sell mobile phone location data offered assurances that the information couldn’t be used to track individuals ...Read More

BALTIMORE -- Raynold Smith beefed with another man for months and when they crossed paths in March 2021, both were armed.

The reason Smith didn’t pull the trigger? In a split-second moment, when life and death hung in ...Read More

Federal prosecutors unveiled fraud and money-laundering charges this week against a former Qualcomm research engineer and three others for allegedly duping the San Diego company into paying $150 million to acquire ...Read More