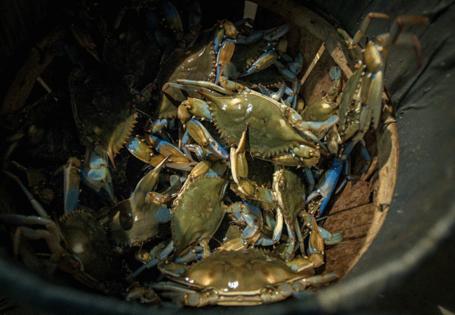 BALTIMORE — This summer Maryland will impose new restrictions on crabbing in the Chesapeake Bay — including the first-ever limits on how many bushels of male blue crabs watermen can haul each day — in response to a troubling decline in the population of the beloved crustaceans.

Regulations issued this week, to be in effect starting in July, will limit commercial watermen to at most 15 bushels a day of male crabs in August and September and will end their harvest two weeks earlier than normal on Nov. 30. And the new rules will tighten existing restrictions on the commercial harvest of female crabs and the recreational harvest, too.

The changes come weeks after an annual survey of Chesapeake blue crabs found they number the fewest since scientists began tracking their population in the 1990s.

That state fishery managers moved to limit even the harvest of male crabs demonstrates the gravity of the situation. Limits are typically only imposed on female crabs as a means of ensuring enough of them to survive to spawn, but with a more than 60% decline in the overall estimated blue crab population since 2019, scientists, environmentalists and representatives from the seafood industry are signaling that more protections are needed to help boost crab reproduction.

Allison Colden, Maryland senior fisheries scientist for the Chesapeake Bay Foundation, called the new restrictions “encouraging” but said they should not be the only actions to protect the “iconic” species.

It is impossible to pinpoint what has caused such a steep decline in the crab population, but factors likely include water pollution and its harms to underwater grasses, which crabs use to hide from predators, Colden said. There is also growing concern that the rapid spread of invasive blue catfish, which eat crabs and practically anything else they can find, may be responsible for much of the crab population decline.

Scientists are scheduled to gather in the fall for a workshop organized by the federal Chesapeake Bay Program to discuss what environmental factors may be having the biggest impact on blue crab survival.

“Targeted research into these factors’ impact on the crab population is a critical next step to help protect communities that depend on blue crabs,” Colden said in a statement.

It does not appear that overfishing on its own is contributing to the population decline, experts say. Population estimates are used to guide changes to the female crab limits every year, and the number of spawning-age females remains above what scientists consider to be a critical threshold to ensure population stability.