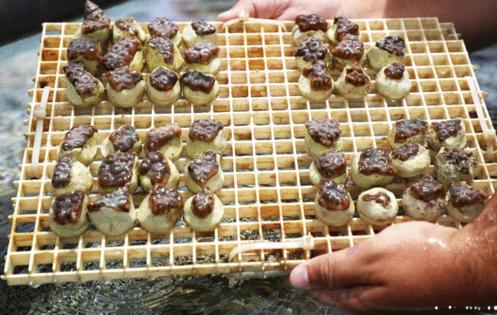 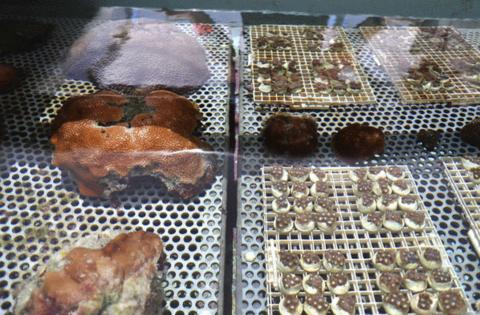 DANIA BEACH, Fla. — In a 600-gallon tank overlooking Port Everglades, small pieces of brain coral and massive star coral grow serenely below the surface of the water. Although some of these pieces are the size of a quarter, all 2,376 fragments at this nursery could make a difference.

“These are what we call corals of opportunity,” said Kyle Pisano, the onshore coral nursery manager. “Corals that have been dislodged from the reef in some way, whether from anchors or storms or something else.”

They bring these corals of opportunity, which would otherwise die, to the nursery to try to grow more coral, in an effort to strengthen Florida’s struggling coral reef populations.

Researchers at Nova Southeastern University are propagating and studying coral at their Oceanographic Campus in Dr. Von D. Mizell-Eula Johnson State Park in Dania Beach. For the past 10 years, they have been growing coral at this nursery to preserve genetic diversity, create more coral for outplanting in the ocean and save coral from disease.

In 2019, NSU researchers began the Noah’s Ark project in a coordinated effort to save corals at risk of stony coral tissue loss disease. This disease has swept Florida and the Caribbean, resulting in large die-offs.

In two years, the researchers rescued 980 corals, called naive corals, before the disease infect them.

“Initially, the efforts were focused on collecting corals ahead of the moving disease front, taking them out of the oceans and saving them from being affected by the disease,” said Dr. Abby Renegar, a researcher scientist working on the project.

Now, the researchers have transitioned more into more broadly preserving corals, including corals that survived disease. They’re studying and propagating those corals in the hopes that their genotype will breed more disease-resistant corals.

“We’ve sort of moved our focus with the capability of the nursery that was established during the initial response to stony coral tissue loss disease to start providing a home for endemic corals for many different reasons,” Renegar said.

In the past year, NSU’s nursery has produced 3,605 fragments of coral, of which a third have been returned to the reefs.

A question I get asked a lot is, “When do you know it is time for a new cellphone?”

A lot of possible answers to the question depend on what type of phone you have, how technical you are and the age of your current ...Read More

There’s a unique commentary behind "Xenoblade Chronicles 3," and it grabs you from the very start. In the world of Aionios, soldiers are bred to be killed, and they live preset, finite lives. And when they do die, ...Read More

While the youngest Gen Z is 10 years old and the oldest is 25 years old, Gen Z has one thing in common: We are chronically online. I am living proof of this, as Gen Z slang terms are constantly worming their way into my ...Read More

Apple Inc. is aiming to hold a launch event on Sept. 7 to unveil the iPhone 14 line, according to people with knowledge of the matter, rolling out the latest version of a product that generates more than half its sales.