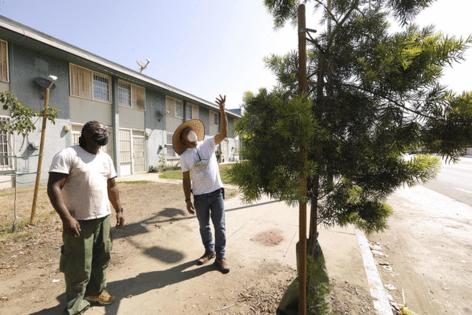 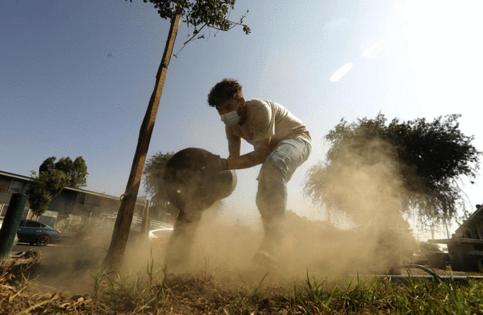 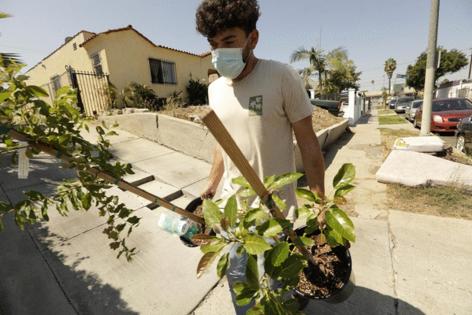 To accomplish this, he appointed the city’s first forest officer, Rachel Malarich, to head the Urban Forestry Division, and authorized a network of nonprofits and “community ambassadors” to aid and encourage residents in planting much-needed trees.

But more than a year after Garcetti’s deadline, it turns out that planting trees in Los Angeles is a lot more difficult than it sounds — particularly when it comes to targeting those neighborhoods most in need of tree cover.

With just over 65,000 trees planted to date, officials are finding that their reliance on city residents to plant and care for the trees comes with significant limitations: Residents in poorer neighborhoods who don’t own land can find it difficult to actually plant trees, or they encounter problems caring for a new trees during their critical three-year establishment phase.

In some areas — such as canopy barren downtown — new trees are often destroyed by vehicles or vandals before they can mature, while older trees are cut down by developers of new buildings, or transportation crews seeking to clear sightlines at intersections.

But this isn’t the first time L.A. has launched a grand-scale tree planting and run into hurdles however. In 2006, Los Angeles Mayor Antonio Villaraigosa launched a program to plant 1 million trees, along with New York City and Shanghai. But by April 2013, the city had planted a little more than 400,000.

This time around, Malarich said she’s more concerned about the equity aspect of trees and where they’re being planted rather than the number. She notes also that Garcetti’s pledge included a promise to boost city tree canopy by at least 50% in low-income areas by 2028.

“The amount of protections we’re providing through increased canopy cover is more important than the number of trees,” Malarich said.

Trees provide myriad benefits to Angelenos, including capturing storm water runoff and replenishing groundwater, cleaning the air and improving mental health. Researchers have also found that neighborhoods with few trees and a lot of pavement, large buildings and other heat-absorbing surfaces can be 10 degrees warmer than surrounding areas.

Even with historic drought restrictions, experts have stressed the importance of continuing to water trees and keeping them alive. During the last drought, as many as 14,000 trees in L.A. parks — about 4% of the total — may have died.

Tanaka had been working service jobs to support an acting career and was coming to realize that a passion for theater wouldn't negate the grind of spending day and night in low-paid positions....Read More

Researchers have created one of the world’s largest networks for sharing quantum information — a...Read More

Lake Oroville, the largest reservoir in a state system that provides water to 27 million Californians, has already reached its peak level for the year, barely surpassing half of its capacity, according to the Department of...Read More

Bitcoin struggled to hold above the closely-watched $20,000 level, extending a period of marked volatility that saw huge weekend swings.