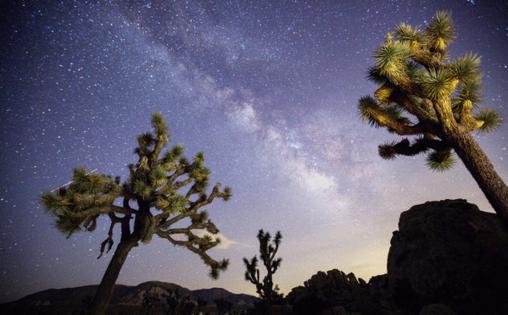 LOS ANGELES — After eight hours of tense debate, the California Fish and Game Commission on Thursday deadlocked 2 to 2 on whether to declare the western Joshua tree a threatened species, forcing continuation of discussions of the volatile issue until November.

Staff biologists had already recommended against listing the species after concluding that claims in a petition filed by environmentalists about the effects climate change will have on the living symbols of Southern California desert were premature.

They questioned the reliability of computer models suggesting the species is in decline throughout its range. They said that’s because although there has been a decline in the western Joshua tree population in certain portions of its historic range, in other areas the species numbers in the millions.

But the petition filed by the Center for Biological Diversity has sharply divided the commissioners, two of whom resisted the staffers’ recommendation and sided instead with conservationists who fear that, absent special state protections, the species could lose 90% of its range by 2100.

Among the dissenters was Samantha Murray, president of the commission, who worries that the western Joshua tree “may already be in significant decline or functionally extinct in some southern portions of its historic range.”

“So, for me, there’s not that much uncertainty about the future of western Joshua trees,” she said.

Unable to move forward on the matter, the panel voted unanimously to reopen the discussion at its meeting in November, leaving temporary protections offered candidates for listing in place until definitive action is taken.

It also asked Chuck Bonham, director of the state Department of Fish and Wildlife, to prepare a report on the viability of developing a range-wide conservation plan for the species, which would include input from stakeholders including conservationists, lawmakers, tribal leaders, property owners, renewable energy companies, labor organizations and the construction industry.

But critics saw the panel’s inability to act on the petition filed more than a year and a half ago as a failure of the state environmental law process.

“It’s immensely disappointing when, time after time, top California officials talk about being leaders when it comes to climate change,” said Brendan Cummings, conservation director of the Center for Biological Diversity and co-author of the petition, “but when tasked with making a decision that would help address the problem, they flinch.

BRADENTON, Fla. — Emily Rowley slipped into the Mazda SUV, gripped the seat belt with her left foot and buckled it over her lap. Her toes twisted the ignition. Her right foot held the brake as her left worked the gear ...Read More

Space travel is clearly for astronauts and the super rich, but NASA has found a way the rest of us can claim our spot among the cosmos.

“You can send your name to the Moon,” agency officials wrote in a June 12 ...Read More

Joby, maker of the industry-leading GorillaPod flexible tripod, has a new focus on both audio and video with the recent release of five mics to their Wavo audio line.

Joby created the mics for various users, including ...Read More

The governor of California stood in a patch of dry brown grass as he made his proclamation:

"We're in a new era. The idea of your nice little green grass getting lots of water every day — that's going to be a thing of ...Read More