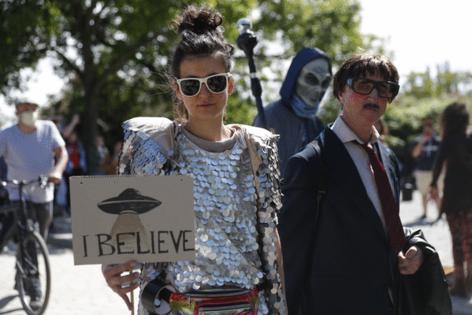 NASA is setting a team to conduct a scientific study into the existence of “unidentified aerial phenomena” — popularly known as UFOs.

UAPs are things observed in the sky that cannot be identified as aircraft or be explained by natural phenomena. UFOs carry the implication that there’s a connection to alien spacecraft, so it’s usually avoided in this context. What NASA is doing is looking at what data is even out there.

“When you’re looking for life on Mars, you start with a hypothesis you want to test,” astrophysicist David Spergel, the study lead and president of the Simons Foundation, said in a news conference today. “This is a phenomenon we don’t understand and we want to collect more data on.”

The study will begin in the early fall and take about nine months to complete, costing no more than $100,000, said Daniel Evans, the assistant deputy associate administrator for research at NASA’s Science Mission Directorate. It will rely mainly on open data, and the resulting report will be published in full and NASA will hold meetings to discuss its findings with the public.

NASA’s study adds to a growing interest in de-stigmatizing what are generally called UFO sightings. In May, Congress held the first hearing into unidentified flying objects since the 1960s. Pentagon and intelligence officials urged the public to report sightings as a matter of national security at that hearing. While this study is not part of the Department of Defense’s task force established in 2021 and charged with identifying and addressing UAPs, Thomas Zurbuchen, the associate administrator for science at NASA, says the scientific interest and aviation safety issues have spurred the group to launch the inquiry now.

Zurbuchen said the study won’t establish whether there is intelligent life beyond Earth, but it might help researchers get a little closer to being able to answer the question.

“At this moment in time, with the evidence that we have, it would be hard to find irrefutable evidence for an event being one or the other,” he said. “I do believe that says very little about the events themselves, it just says something about the availability of data, which is exactly why were doing this.”