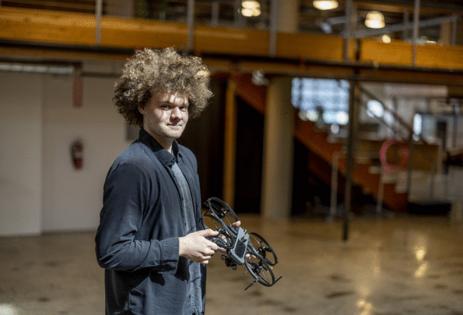 Blake Resnick was a 17-year-old growing up in Las Vegas when a gunman firing from a Strip hotel window killed 60 people at an outdoor concert.

In that October 2017 tragedy, Resnick, an engineering prodigy, recognized an opportunity. He imagined advanced drones buzzing to dangerous locations, giving first responders a way to assess the situation quickly and safely, and allowing them to communicate directly with someone inside.

Five years later, Resnick is in Seattle, and quadcopters built by his startup, Brinc Drones, are flying in some of the world's most dangerous spots.

"The deadliest mass shooting in American history happened in my hometown," Resnick said, "and I saw a place where technology could have saved lives."

Fire departments are using them to inspect burning buildings before sending in firefighters.

U.S. police departments are buying them to conduct hostage negotiations and high-risk searches.

After an initial injection of $27.2 million in venture capital, Brinc grew within the past year from a one-man company — Resnick — to employing about 100 people between its manufacturing site in Las Vegas and its new headquarters in Seattle.

On the Brinc website, a "Values & Ethics" page outlines the Brinc mission "to bring these technologies into the world responsibly, and to ensure they do good."

The commitments include: "Never build technologies designed to hurt or kill."

CHICAGO — If it were up to Jacques Wallace, no Chicagoan would find a loved one dead of heat stress, without air conditioning, ever again.

Wallace still remembers how hot it was a decade ago when he walked into the Near...Read More

SACRAMENTO, Calif. — The fragile little fish that swim around in dark tanks in a lab are the last hope for their kind. The lab director who oversees their care, Tien-Chieh Hung, explained that when the Delta smelt ...Read More

Jackie Minett is a tour guide at Butterfly World in Coconut Creek, Florida, dubbed the “butterfly capital of the world.” She leads children and seniors, some tourists, some Floridians, around the gardens to gawk at ...Read More

RALEIGH, N.C. — Bob Karp waited nearly three hours through a hot August Sunday for a glimpse of the painted bunting — sometimes called the most gorgeous bird in North America, with its feathers flashing red, green and ...Read More

Wildfires could make their way into the keystone state and possibly into your backyard, climate, fire and forestry scientists say.