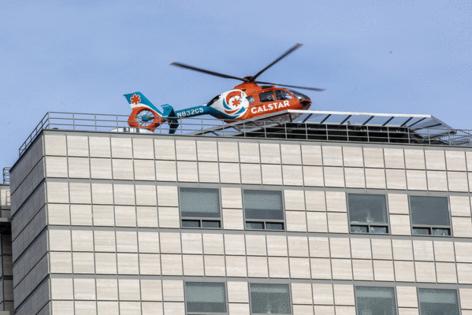 The critically ill newborn baby was whisked by helicopter Saturday from rural Silverton, Oregon, to a children’s hospital in Portland, the kind of life-saving transport Life Flight Network makes thousands of times a year.

But starting Jan. 19, when new 5G wireless service kicks off across the country, such routine air-ambulance missions may no longer be permitted.

U.S. regulations in many cases require commercial helicopters — including air ambulances and scores of other operators — to have a functioning device known as a radar altimeter. But new frequencies being shifted to 5G service may render them unreliable. That could make landings in remote areas dangerous and put Life Flight’s hospital landing pads in Portland and Seattle off limits, said Ben Clayton, interim chief executive officer of the Aurora, Oregon-based nonprofit.

“We have a lot of trepidation over the potential impacts,” said Clayton, who relayed details of the Saturday flight.

Wireless carriers point to research they say shows helicopters and 5G co-existing safely in other countries. But the Federal Aviation Administration on Thursday restricted helicopter operations in regions in which hundreds of hospitals are located unless manufacturers can demonstrate their aircraft can withstand 5G interference. The new limits are among 1,462 imposed on flight operations that rely on radar altimeters the agency posted on Thursday.

Unlike jets, helicopters operate close to the ground — where cell towers are located — almost all of the time. They also land frequently away from airports, making them one of the most difficult aviation issues to resolve with 5G.

The issue is that new 5G signals operate in airwaves adjacent to those used by the altimeters. The wireless industry and the Federal Communications Commission, which approved the use of the frequencies, maintain the frequencies are far enough away from aircraft signals that they won’t pose any danger. But tests by aviation groups have found the devices are susceptible to interference.

Fifty U.S. airports won at least a partial reprieve from the most draconian flight restrictions in a compromise between aviation regulators and AT&T Inc. and Verizon Communications Inc. announced on Jan. 3. But airlines, helicopter operators and scores of other aviation operators are girding for significant impacts once the new service switches on.

The six-month restriction on locating 5G cell towers near runways at those 50 airports only protect the last 20 seconds before landing, the FAA said on a website detailing its actions. The agency included potential restrictions for landings at many of the 50 airports, including Chicago O’Hare, New Jersey’s Newark Liberty and Detroit Metro, in the documents it posted Thursday.

He has a computer, but uses it as a word processor. He goes to the library regularly to check email or go on the internet.

"I was dragged kicking and screaming ...Read More

Last year was a banner year for gamers, who got treated to a host of terrific offerings, including a stunning "Halo" game and a surprising "Metroid" title. It�...Read More

NAD's C700 BluOS all-in-one streaming amplifier can be connected in minutes for music streaming, and you'll be happy with it. But when you look into all the additional built-in features, everyone from non-tech heads to ...Read More

This week’s question is from a reader who wants to use his Windows 10 laptop at home with an external monitor. He was going to use an external keyboard and mouse.

The first step is to connect your laptop to the ...Read More