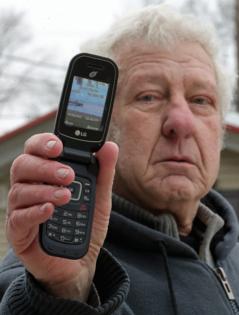 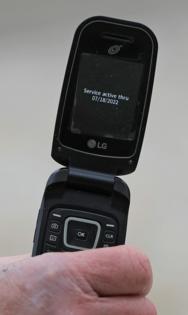 He has a computer, but uses it as a word processor. He goes to the library regularly to check email or go on the internet.

"I was dragged kicking and screaming into the computer age," said the 82-year-old retired writer who lives in Springfield Township, Ohio.

His cellphone is a flip phone. He thinks he bought it 10 years ago, and he uses Tracfone to buy buckets of minutes since he doesn't want an expensive monthly bill.

He only has it for emergencies and to call his adult son in West Virginia with prepaid cell minutes instead of hefty landline long distance rates.

But now Miller and others nationwide who have old phones on the nation's 3G cellular network are going to have to buy a new phone if they want service.

The nation's major cellular phone carriers are sunsetting, or shutting down, their 3G networks, which were first introduced 20 years ago and rely on older technology, to make room for more advanced network services, including 5G, said the Federal Communications Commission.

"As a result, many older cellphones will be unable to make or receive calls and texts, including calls to 911, or use data services. This will affect 3G mobile phones and certain older 4G mobile phones that do not support Voice over LTE (VoLTE or HD Voice)," the FCC said.

This could also impact other gadgets, such as medical devices, home security systems, smart watches, vehicle SOS services and other connected products may be using 3G network services, the FCC said.

The various cell companies will be retiring or sunsetting their 3G networks throughout this year. Here's information on dates from the FCC. It's possible dates could change, but it's good to know what is coming up so you can prepare, if needed: