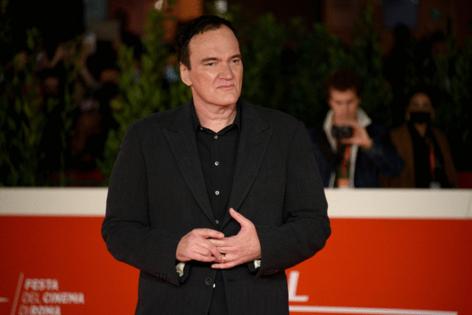 Tarantino this month announced that he plans to sell images of pages of scenes from an early handwritten version of the "Pulp Fiction" script as NFTs; they also would include audio commentary. Tarantino partnered with technology company SCRT Labs to auction seven tokens based on the movie.

Miramax, which released "Pulp Fiction," on Tuesday accused Tarantino of breach of contract, copyright infringement and trademark infringement, saying he doesn't have permission to sell the NFTs.

Miramax, owned by Qatar-based BeIn Media and ViacomCBS, said in a complaint filed in U.S. District Court in Los Angeles that the company had sent Tarantino a cease-and-desist letter after learning of the NFT plans, but Tarantino refused to comply with its demands.

"Tarantino's conduct has forced Miramax to bring this lawsuit against a valued collaborator in order to enforce, preserve, and protect its contractual and intellectual property rights relating to one of Miramax's most iconic and valuable film properties," the company said in its complaint. "Left unchecked, Tarantino's conduct could mislead others into believing Miramax is involved in his venture. And it could also mislead others into believing they have the rights to pursue similar deals or offerings, when in fact Miramax holds the rights needed to develop, market, and sell NFTs relating to its deep film library."

A representative for Tarantino did not respond to The Times' request for comment.

"Pulp Fiction" was a critical and commercial hit and established Tarantino as a major filmmaking force after the success of "Reservoir Dogs." It won the Palme d'Or at the Cannes Film Festival and was nominated for multiple Oscars including best picture. It won the award for screenplay, which Tarantino shared with Roger Avary.

Miramax also released Tarantino films including "Jackie Brown" and the two "Kill Bill" movies. Miramax was then run by Harvey and Bob Weinstein, who later continued their relationship with Tarantino at the Weinstein Co. "Pulp Fiction" remains one of the most prized pieces of Miramax's film library.

"It was profoundly disappointing to learn of this deliberate, premeditated, short-term money grab by the Tarantino team to unilaterally circumvent Miramax's rights to 'Pulp Fiction' though the illicit development, promotion, and distribution of NFTs," said Bart Williams, an attorney at Proskauer Rose LLP, which is representing Miramax.

NFTs are essentially certificates of authenticity for objects, such as pieces of digital art, sports memorabilia and concert tickets. The unique digital files, which are stored and tracked on a blockchain network, surged in popularity with investors this year, particularly among cryptocurrency enthusiasts. The phenomenon caught mainstream attention when an NFT for a digital collage by graphic artist Beeple sold at auction for $69 million.

For artists and companies — including filmmakers and movie studios — NFTs have emerged as an intriguing new way to monetize and promote their work. WarnerMedia's Warner Bros. has worked with NFT platform Nifty's to sell avatars for the upcoming "Matrix Resurrections" and the recently released "Space Jam: A New Legacy" as virtual tokens.

But as independent artists have looked to ride the wave of the new demand for their work through this asset class, studios have sought to assert control of how intellectual property is used, including for NFTs based on popular superheroes.

In its complaint, Miramax cited a 1993 agreement with Tarantino to argue that the filmmaker's reserved rights for "Pulp Fiction" were limited to the soundtrack album, music publishing, live performance, print publication, interactive media, theatrical and television sequel and remake rights, and television series and spinoff rights.

"Tarantino's Reserved Rights do not encompass any rights or media that were not known at the time of the Original Rights Agreement," the complaint said. Tarantino did not consult Miramax on the creation of "Pulp Fiction" NFTs, Miramax said.

Intel's promise to invest $20 billion to build two semiconductor plants in Licking County could be just the start for what the Silicon Valley giant has in mind for Greater Columbus, the company's CEO told The Dispatch.