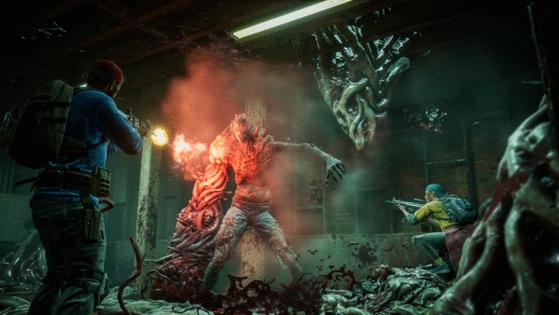 I’m not going back for my brother. Although I guess I should. But at the moment, I’m doused in blood and I’m standing atop a truck, and I’m watching the infected close in on my fallen sibling. And I’m kind-of, sort-of thinking that we’re both better off if I head for the safe room and get us to the next chapter.

Ehh, hell. Let’s go back and try to get him. Because in "Back 4 Blood," half the fun is doing these irrational, overly heroic things, even when they make no sense.

Developer Turtle Rock studios gets this. Twelve years after "Left 4 Dead," "Back 4 Blood" delivers a game full of coop zombie-killing thrills, a robust title that’s meant to be enjoyed with friends. It starts with simplicity and then layers on enough variety to keep things fun for hours on end, in a lengthy campaign that’s loaded with replay value.

The core gameplay is simple. You and up to three friends (or bots) take on a robust campaign filled with level after level of zombies. A thin (although hardly unfamiliar) story underlies the entire experience: Most of the planet’s been infected by a virus and it’s up to you to survive in this postapocalyptic world. So you choose one of eight characters and begin your journey.

The premise is simple, but "Back 4 Blood" introduces plenty of fun on top of that. Early Chapters essentially push you to simply advance from safe house to safe house, and killing zombies as you go, but soon enough, the objectives change. You have to place bombs on a boat to blow it up one moment, bring a bunch of other survivors back to a safe house, one by one, in the next. There are bosses to be fought, and hordes to trigger in order to advance to certain sections.

The variety gets further compounded by the game’s most unique addition, a deck of cards. Weapons come and go in "Back 4 Blood" and lack permanence. But over time, you’ll build a card deck filled with buffs for your character, for the level, or for the party. These can range from things like increased stamina (key for running and melee battling), or one particularly useful move that adds a knife to your hand-to-hand melee attack. Cards are randomly drawn before each chapter. Meanwhile, the A.I. draws “corruption” cards, which randomly alter levels, dropping fog in an area, for example.

This randomness couples with a smart A.I. game director to load "Back 4 Blood"’s lengthy campaign with replay value. Levels may look the same, but the game throws different enemies and hordes and setups at you. With rare set piece exceptions, the Infected you encounter are largely randomized, and that makes each playthrough feel distinct, even if you’ve seen a level many times before.

That randomness does tend to veer towards challenging, though. You’re rarely faced with just waves of zombies; often, you’ll encounter special classes that do excess damage and challenge you in different ways, sometimes spitting, sometimes exploding, sometimes grabbing and doing vicious damage.

Generally, shooting at the glowing red handles the problem, and no enemy is so bullet-spongy that the game feels cheap or frustrating. These elite Infected do pop up frequently enough, though, that, more often than not, there’s somebody more challenging than the average for you to deal with.

Luckily, you’re always equipped for the journey. The first-person shooting is tight, and every weapon feels potent. Efficient headshots are the norm, and the entire experience is snappy enough to permit them from happening easily. You’ll be a bit disappointed that weapons (and even weapon upgrades) lack any sort of permanence, though; the only thing that carries ahead from chapter to chapter is the deck you built.

Still, there’s major fun to be had in "Back 4 Blood," which also manages to be a good-looking game. Whether you’re working through the campaign or trying the cleaners vs. Infected multiplayer, which pits a handful of humans against a handful of zombies in a series of matches to see who can kill more, you’re almost certain to wind up covered in plasma.

That’s not at all a bad thing. "Back 4 Blood" definitely builds on "Left 4 Dead," and it doesn’t drive too far from that steady formula. But the "Left 4 Dead" formula still works, and it’s a recipe for quick cooperative gaming fun whenever you take it on. Yes, there are other cooperative games out there, titles with deeper story and more lore or more involved progression.

There may not be a cooperative game that’s easier to instantly jump into, though, than "Back 4 Blood."