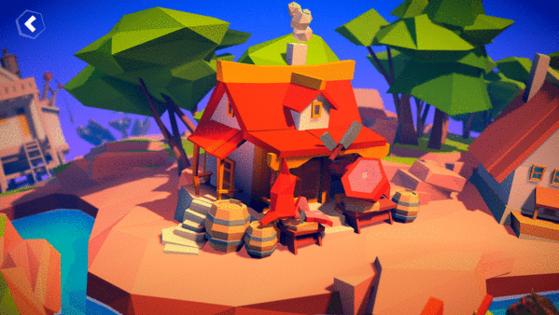 The origin of “Doodle God Universe” came at a moment of serendipity for JoyBits and Apple. The developer wanted to remaster the game with better art and style for its 10th anniversary. Meanwhile, the Cupertino-based company came calling and wanted the studio to bring the title to Apple Arcade.

“It happened so that we found each other at this point,” said Dmitry, JoyBits’ business development manager who wanted to go by his first name. The team didn’t want to overhaul or reinvent the game per se, but JoyBits wanted to make it easier to play and get rid of the distractions of in-app purchases and ads.

The interests aligned and “Doodle God Universe” came to the service earlier this month. It’s a project that puts players in the role of a creator in charge of a planet. It starts off simple with four elements: fire, earth, air and water. Combining those parts creates new elements to work with. For example, mixing water and fire creates steam. Adding earth onto fire makes lava. Using that lava and cooling it off with water creates stone. As one can see, the possibilities seem endless.

They can create acid, skyscrapers and even dragons. Dmitry said JoyBits made “Doodle God Universe” easier to play by giving players more ways to craft one element. Players have at least three different ways to craft grass, making the experience less frustrating.

“Doodle God Universe” is more of a puzzle game than anything else. Don’t confuse it with a god game like “Populis.” Players create elements and they show up on the planet, but players don’t have any way to interact with them. Players can’t create more grass and have it cover the earth or they can’t make humans and watch them colonize continents. The animation and artwork on the surface is nice to glance over, but they exist as is almost like a trophy case rather than moveable pieces.

The fun in the project lies in trying to figure what combinations create new elements. “Doodle God Universe” is one of those lazy Sunday afternoon games. You pick it up to relax and you experiment to find the right combinations. There’s a certain logic to crafting all manner of objects, and players will have that “aha” moment — unintentional or not — when they continue combining.

With at least 138 elements to discover, “Doodle God Universe” will have enough content to keep players busy for a few hours. Plus, they can also enjoy the music and voice over work. Taking a cue from films like “Bruce Almighty,” JoyBits hired a voice actor who sounds like Morgan Freeman to do the narration in English.

It’s a fitting touch for a remaster that seems to do everything right.

A girl, some dice and a board game world — those seemingly incidental images came together in a painting, and from that ...Read More

DALLAS — Dallas serial tech entrepreneur Ben Lamm has never been one to shy away ...Read More

Adding a device like this is almost a necessity for long trips in cars, ...Read More