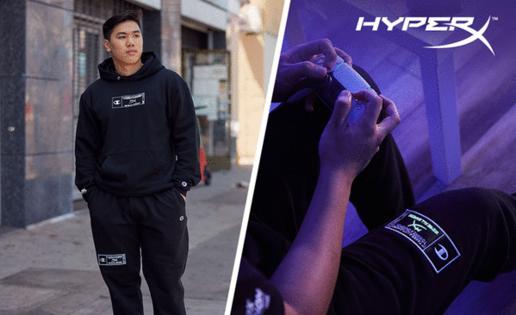 Fashion is quickly becoming the latest trend for gaming peripheral makers. Razer found success with its apparel line coming out its Kanagawa Wave collection and its collaborations with A Bathing Ape.

Now, HyperX is getting into the act with its own partnership with Champion. Known for its sweatshirts, Champion excels when it comes to athleticwear. The company’s gear is comfortable and great for workouts. The HyperX and Champion collaboration brings that same quality with a gaming emphasis in the third collection from the companies. The HyperX x Champion Glow in the Dark collection features a dark base color. More importantly though, the clothes have glow in the dark accents that make it stand out.

“The success of the last two HyperX x Champion collections underscores that gaming fans crave trendy, comfortable apparel that displays their passion for gaming and style,” said Stephanie Winkler, HyperX strategic marketing manager, in a news release. The gear is made for gamers and streamers who want clothing stands out while they play on Twitch or YouTube.

The previous two HyperX x Champion collaborations sold out. They were the Black/Rose Gold collection and the Champion Reflective gear.

Hg, the investment firm, said Tuesday that it will invest around $1 billion into Raleigh ...Read More

Q: In Gmail, I created a personal folder to save received e-mails for future reference. But Gmail removes them from this folder after a month or less. Where did these e-mails go, and how can I keep them?