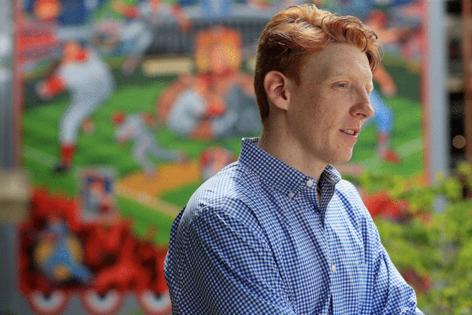 Kane’s golfer, Kiradech Aphibarnrat, performed surprisingly well through the first half of the four-day tournament and was only a few strokes behind the leader after two rounds. The odds in his favor had risen about 100 times from the start of the tournament.

Kane would have liked to trade his bet at that point, just as he could sell a stock or cryptocurrency on a smartphone app such as Robinhood or Coinbase, the popular tools for a new generation of traders. But there was no similar market platform for trading sports bets.

“That’s when I realized, ‘Oh, my gosh, this structure stinks,’ ” said Kane, who grew up in Birmingham Township, Pa. “It should be way more like capital markets trading, where like I’m able to pick up Robinhood or Coinbase and trade based on the changes in the market.”

Alas, Kane lost his wager on Aphibarnrat, who finished tied for 15th in the Masters. But the seed of a new business was planted.

Fast forward five years. Sports betting is legal now in Pennsylvania, New Jersey and about a dozen other states. Kane, now 27, has transformed his idea into a real business, Sporttrade Inc., which he envisions will operate more like a stock exchange than a traditional sportsbook. It launched its website last month, www.sporttrade.com, and it’s undergoing licensing review in New Jersey. Pending approval, it could begin taking bets by the end of the summer.

“We fundamentally believe that what we are building is so much closer to options trading or futures trading than traditional sports betting and casinos,” said Kane, who studied business administration at Drexel, where he was also an intercollegiate golfer.

Kane hopes Sporttrade will dramatically change the way in-game sports betting is conducted by increasing the speed and lowering the cost for bettors to wager while an event, such as a golf tournament, is underway.

Bettors using sports-betting apps can now place wagers during an event, and even cash out of a position. But experts say there is often a delay as bookmakers ponder whether to accept or reject an in-game wager as they assess their risk, and the margins the bookmakers earn on such bets makes them unattractive.

“You’ll find that if you’re not betting at the timeouts or between the quarters, you’re going to end up with a situation where you submit the bet and then there is a delay,” said Jack Andrews, a professional sports bettor in New Jersey. “It seems like they’re getting a free roll against you.”

Last month, Robert Reeve, a digital tech worker from Washington, D.C., went to visit his mom in Michigan for a week. Shortly after, ads for a brand of toothpaste his mom uses—and that he also used during his stay at her ...Read More