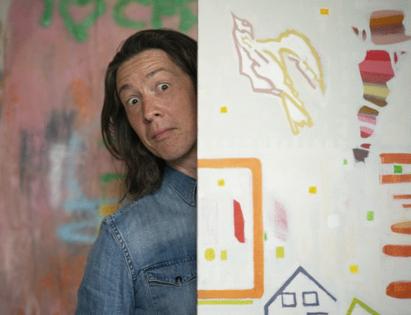 MINNEAPOLIS — In northeast Minneapolis' arts district, a tall, lanky man with slate-colored, shoulder-length hair often wanders by the railroad tracks with his phone at arm's length, recording himself.

By posting selfie videos expounding on "How Relationships Are Like a Night at the Casino," "Why Quitting Is Awesome" and "Why It's Weird to Make Kids Read the Bible," among other subjects, Abraham Piper has become one of Minnesota's most popular TikTokers, with nearly a million followers. His high-energy, hyper-expressive persona resembles Wayne from "Wayne's World," waxing philosophical about linguistics and the meaning of life.

It's heady stuff for a platform dominated by teen girl dance-and-lip-sync routines that wouldn't have made it past a bedroom mirror before the internet.

"I'm an old dude compared to most people on TikTok," Piper said, explaining his popularity with a young audience. "And I have experienced what they're going through now already and I'm talking about it in a way that maybe their parents aren't."

A decade ago, when he was a newly married young parent, working an unglamorous warehouse gig, Piper started a personal blog called 22 Words. Within a few years, he transformed it into a trending news site drawing millions with its mix of shock factor and schadenfreude, funny and feel-good.

One month in 2013, 22 Words improbably became the second-most-shared site on Facebook, beating behemoths such as CNN and the Huffington Post. Back then, it was run solely by Piper, the low-key David of viral clickbait to Goliaths like Upworthy and BuzzFeed.

Today, with the help of his Los Angeles-based "tech geek friend" and business partner Josh Sowin, Piper has turned 22 Words into a company the two say earns $30 million in annual revenue.

Yet Piper speaks nonchalantly about his ability to draw attention online: "I'm just sort of a conduit for various interesting things," he said.

Though it may seem surreal to earn a living off celebrity gossip and cat videos ("It's amazing you can get paid for nonsense," as Sowin's father recently put it), there's an art and a science to getting people to click. And Piper has proved to have a knack for it.

Qualcomm has been working for years to get its mobile technology into other products besides smartphones — think drones, laptops and smart security cameras.

Those efforts to connect the unconnected — generally called ...Read More

Ubisoft title will launch Oct. 7 and takes place in an nation inspired by Cuba

For a long time, Giancarlo Esposito, who starred in “The Mandalorian” and “Breaking Bad,” was the face of the first-person shooter ...Read More

This week a reader writes in: “If I was going to look at buying a refurbished laptop, is there any simple way to determine the state of the battery? I know it is not going to be a new battery, but is there any way to ...Read More

What was supposed to be an hour or two for testing turned into a successful 12-hour cleaning project with the Dewalt 20 V MAX 550 PSI power cleaner kit.

I’ve been a power washing fan for a year, so now adding the ...Read More

If you're looking for your first smartwatch or replacing an old one, there are a lot of factors to consider when trying to figure out the best smartwatch for your needs — especially since it will probably be strapped ...Read More