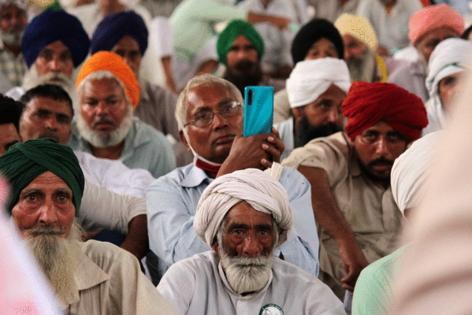 When Facebook and Twitter sought to limit the extent to which their platforms could be used to spread disinformation related to last year’s presidential election, Amal Chandra, a 22-year-old university student in Kerala, India, applauded their efforts.

Now, Chandra, who studies political science at Pondicherry University, is wondering why the same companies are complying with demands by the Indian government to remove social media posts critical of Prime Minister Narendra Modi’s handling of the COVID-19 pandemic.

“During the U.S. presidential election, we saw a fair, neutral, objective position from the side of social media,” Chandra said in an interview. “So why can’t they do the same in India?”

In recent days, the social media giants removed about 100 posts in India following an emergency order by Modi’s government at a time when the prime minister, previously criticized for downplaying the severity of the pandemic, is faced with a surge of hundreds of thousands of positive coronavirus cases to which the government has been slow to respond.

Then, last Thursday, Facebook temporarily hid posts containing the hashtag #ResignModi. The company said it had done so by “mistake” and “not because the Indian government asked us to,” and said the posts were restored to the platform.

The government said the originally removed posts threatened public safety, undermined the government’s efforts to fight the pandemic, or sought to spread misleading information. Individuals who have used social media to seek medical help and supplies have also been persecuted, according to reports.

But those critical of Modi, who leads the right-wing Bharatiya Janata Party, or BJP, say the order was designed to silence free speech and political dissent. Chandra, who describes himself as a center-left liberal, was disappointed when the companies complied with the order.

Beyond its explanation for the temporary removal of #ResignModi posts, Facebook declined to comment on the removal of posts at the government’s behest. In a statement, a spokesperson for Twitter said the removals from its platform were in accordance with Indian law.