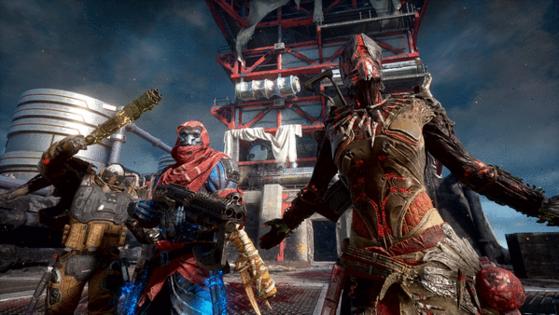 Then you’ll like "Outriders." The new action role-playing game from Square Enix and developer People Can Fly fuses together ideas that have come to define the shooter genre, and while the writing isn’t perfect, and there are still far too many bugs that break your immersion, there’s a lot to enjoy about "Outriders," and a large world to dive into.

Your world is the planet Enoch, which once was a place that humans had hoped to settle. But after an event leaves you in cryostasis, you return to a war-ravaged Enoch with a host of new creatures that require your attention. Humans are suddenly fighting for their lives in Enoch. And in steps, well, you.

"Outriders" winds up delivering a fairly compelling narrative through a combination of cutscenes and lore, and it borrows from the "Mass Effect" playbook here in multiple ways. First off is that balance. One of "Destiny"’s early missteps was how most of the story felt decidedly optional, left for you to read about it and want to know. "Outriders" thrusts you more directly into the narrative, delivering key points in more dialogue and working to invest you more in the the action. Yes, there’s further lore hidden away, but you’re still more interested in all the action.

It’s also a decidedly "Mass Effect"-style story. You are an Outrider, a uniquely built character with special powers that give you an advantage in battle (sound like Shepard?). There’s mystery and uncertainty about your powers, and there are shadowy figures.

And combat has some "Mass Effect" touches, too. Yes, on the surface, this game seems to draw its battling inspiration from "Gears of War" and "Destiny": It’s a third-person cover shooter on a fundamental level, and you’ll battle enemies in a variety of large open areas that are accessible via fast-travel. There are looter-shooter characteristics too: Expect a plethora of varied guns and armor options, each with different special abilities. There’s a derivative quality to it all, but if you’re going to draw from old source material, it might as well be the best, right?

It all comes together in solidly satisfying combat, even if things don’t always go the way you want them to. "Outriders" is best played as a cooperative game with a friend, and in these situations, you’ll rarely rely heavily on the cover mechanics. Instead, you’ll charge forward, using a blend of your special abilities and a variety of run-and-gun tactics.

That’s especially true because the cover tactics can be frustrating. "Gears of War" always possessed fluid snapping into cover and a natural sense of when and how you’d clamber over an obstacle. Time and again, "Outriders" botches that ability to essentially mantle, and in one area, where you’re essentially fighting upwards against a series of hill-stairs, this grows particularly frustrating. Also frustrating is the lack of some sort of jump button: In several areas, that’ll have you running all the way around and down a bunch of stars or some ramp after reaching the high ground, purely so you can fight enemies you could see from said high ground.

Most fights in "Outriders" demand you use all your tools. Overuse your guns, and you’ll struggle to control large crowds of enemies. And the varied powers often play a key role in turning the tide of battle. There’s nothing quite like being surrounded by a group of baddies, then trapping them in a time-slowing, damage-enhancing bubble and shooting them into oblivion (or just engaging in some melee brawling). Or maybe you escape a large fracas by teleporting to a different area of the battlefield.

It all takes time to learn, but you get plenty of chances. Cool downs are scant because the game wants you to use your abilities. And you quickly learn the ropes.