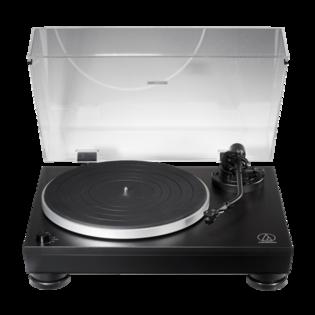 Q. I am interested in the Technics OTTAVA-f SC-C70MK2 music system you have praised in the past. I would like to play my vinyl records and had previously planned on getting a system with a receiver and speakers. Is it possible to use a turntable with the SC-C70MK2, and if so what would you recommend?

The $1,199 Technics SL-1500C would be an ideal match to the SC-C70MK2. It is a top-performing turntable that is also an ideal visual match to the SC-C70MK2, both sharing a minimalist, brushed metal finish. It comes with a pre-installed and aligned Ortofon 2M Red cartridge and has auto-lift at the end of the record. It is a little bit pricy relative to the SC-C70MK2, but once you have it you will be glad you spent the money. It represents a lifetime investment, and the cartridge can be easily upgraded by changing the Ortofon 2M Red stylus to the Ortofon 2M Blue stylus. technics.com

The $399 Music Hall MMF-1.5 is another Sound Advice favorite, specifically in its “Vessel Special” version sold by LP Gear, which sports the fantastic Vessel A3SE cartridge for $499. The MMF-1.5 also has a built-in phono preamp but lacks the auto-lift feature of the SL-1500C. musichallaudio.com and lpgear.com.

A promising newcomer is the Audio-Technica AT-LP5X, an upgrade of the previous AT-LP5. It is $449 and has a black finish that is probably a better match aesthetically to the SC-C70MK2 than the wood-finished MMF-1.5. The AT-LP5X has a USB port for digitizing your records or playing them through your computer, a feature the SL-1500C and MMF-1.5 both lack. The AT-LP5X is $449 and can be seen at audio-technica.com.

No matter what turntable you decide to buy, place it as far away from the SC-C70MK2 as you can and ideally on a different surface. If you do not, vibrations from the music system could affect the playback of the turntable and create harsh feedback.

TiVo Edge Antenna DVR (with All-In Service): I still received questions about DVRs for use with antennas, and the Tivo Edge Antenna DVR appears to be the best yet, and a cord-cutter’s delight! It has two over-the-air tuners for watching or recording more than one program at a time, and links to the internet to provide streaming service all from a single source, using the popular TiVo DVR operating system.

I frown on subscriptions for owned DVRs unless they are linked to a service like cable or satellite TV. Accordingly, my recommendation is that you buy the Edge with All-In Service, which includes a TiVo subscription for the life of the product. The TiVo Edge Antenna DVR is normally $449 but is currently on sale for $349 at channelmaster.com.

Q. I have Polk Audio TSi400 tower speakers and a Sony STR-DH190 receiver. When I turn up the volume the receiver shuts down with a “protect” message. I have read this is to protect against distortion that could damage ...Read More

Q. I see I’ve missed the boat picking up the Hanasco Sonic Electric toothbrushes on Amazon. Since I’m buying for two males, the pink won’t work and that is all that is left in stock. Is there anywhere else I can buy ...Read More

Q. I purchased the RF skin treatment machine you recommended and can’t find the original RF gel for sale anywhere. Is it available on its own, and if not does it matter what brand I use?