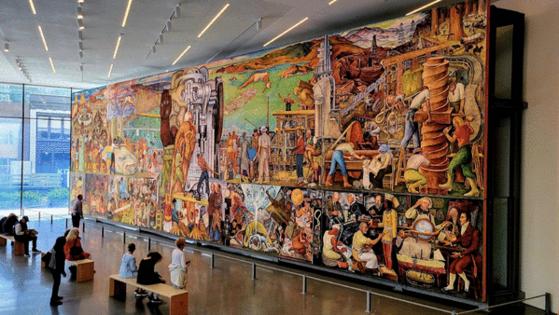 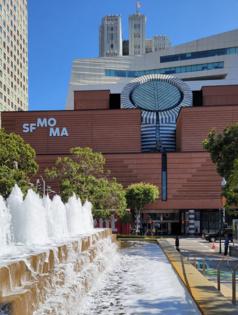 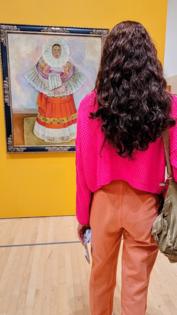 We tend to think of the Renaissance as a strictly Italian phenomenon. But in the 1920s and '30s Mexico experienced a renaissance that produced artistic and political shockwaves around the world. It was a celebration of culture and politics that brought together a remarkable group of artists, sculptors, composers, photographers and filmmakers.

The movement's dynamic and best-known leader was Diego Rivera, along with his flamboyant third wife, the artist Frida Kahlo. The medium he chose to express the full scope of his artistic vision was the mural. These vast, panoramic creations in fresco fill entire walls and tell myriad stories that incorporate characters who range from steelworkers, farmers and Aztec gods to glamorous Hollywood stars. They are, in many ways, the visual blockbusters of the era.

The San Francisco Museum of Modern Art is showcasing this moment in history with an in-depth exhibition, "Diego Rivera's America," through Jan. 3, 2023. It brings together more than 150 of Rivera's paintings, frescoes and drawings alongside three galleries devoted to large-scale film projections of the highly influential murals he created in Mexico and the United States, primarily from the 1920s to the mid-1940s. The exhibition's 10 thematic galleries are dedicated to the people and places that ignited Rivera's imagination and include an extensive array of paintings, preparatory sketches and "cartoons" -- hand-drawn templates to scale that are applied over the wet plaster as a guide.

The unquestionable crown jewel, however, is the entire mural Rivera titled "Pan American Unity," which was commissioned and completed in 1940 for the Golden Gate International Exposition. This 30-ton, 10-panel creation has been painstakingly transported from the City College of San Francisco to SFMOMA, where it is installed in its own gallery so that its panoramic nature and cast of thousands can be fully appreciated. The museum also offers an accompanying brochure that allows the viewer to follow the mural's multiple storylines, symbolism and characters. The effect is awe-inspiring.

Diego Maria de la Concepcion Juan Nepomuceno Estanislao de la Rivera y Barrientos Acosta y Rodriguez -- Diego Rivera -- was born Dec. 8, 1886, in Guanajuato, a city in Mexico. As a young aspiring artist, he traveled first to Madrid (in 1907), then to Paris, where his imagination was ignited by artists such as Pablo Picasso, Georges Braque and Amedeo Modigliani. When he returned to Mexico in 1921, he brought with him a mastery of fresco painting, which he had studied in Italy.

It was this tempestuous moment in history that produced the Mexican Renaissance, led by its muralists: Rivera, Jose Clemente Orozco, David Alfaro Siqueiros and Rufino Tamayo. In 1922 Rivera co-founded the Revolutionary Union of Technical Workers, Painters and Sculptors. And a year later he joined the Mexican Communist Party. For these artists, life, labor, political ideology and art were completely intertwined.

Ironically, as Rivera's fame grew, some of his greatest admirers and sponsors were the industrial giants of America. John D. Rockefeller commissioned him to create a mural for his new Rockefeller Center, then had it torn down when Rivera refused to remove a portrait of Lenin within the design. He would create murals for the San Francisco Stock Exchange, the Chicago World's Fair and his American masterpiece: 27 frescoed panels titled "Detroit Industry" that fill the inner court of the Detroit Institute of the Arts and were paid for by Edsel Ford.

Passing from one gallery to the next, it's impossible not to be impressed by the power -- as well as the delicacy -- of Rivera's work, from his grandest frescoes to his gentle portraits of men and women harvesting calla lilies.

There is no shortage of reasons to visit San Francisco. But having the opportunity to see "Diego Rivera's America" at the San Francisco Museum of Modern Art is an especially good one.

To learn more about this showing and Diego Rivera and to purchase tickets: www.sfmoma.org/exhibition/diego-riveras-america. Another good way is to see Julie Taymor's film, "Frida," starring Selma Hayek as Frida Kahlo and Alfred Molina as Diego Rivera.