The View From a Riverboat Window on the Nile River 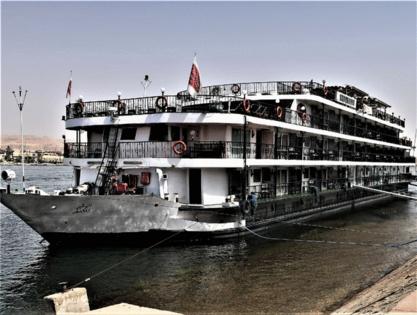 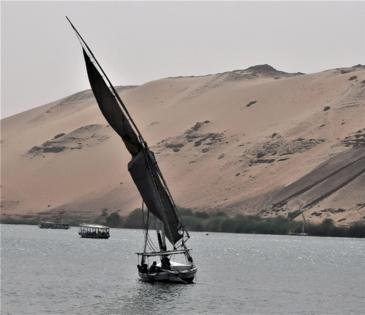 As I sat on the sun deck outside my riverboat cabin overlooking the surrounding scene, many of the most fabled attractions of Egypt came into view. The towering Pyramids of Giza were guarded by the world-famous Sphinx, whose face, believed to portray that of a pharaoh, sits on the body of a lion.

I spotted and marveled at some of the more than 100 pyramids dotted about the country. While they are the focus of much-deserved attention, I soon realized that equally impressive monumental temples dedicated to the worship of gods and the commemoration of pharaohs compete with them in size, beauty and wonder.

The temple complex at Karnak, whose construction began in the 19th century B.C., encompasses shrines and monuments built for a series of rulers. Walls are covered by hieroglyphics that remain as deeply etched and detailed as when they were carved. The colors of wall paintings are as bright as when artists applied them thousands of years ago.

The temple at Luxor was a center for some of Egypt's most powerful pharaohs. They included Ramses II, whose reign lasted 67 years, and Tutankhamen ("the boy king"), who died nine years after taking the throne.

These were among countless treasures that became accessible as the sleek ship on which my wife, Fyllis, and I were sailing was making its way along the Nile River. We were passengers aboard the Nefertiti, a boat designed for the Overseas Adventure Travel tour company to ply the waters of one of the most famous waterways in the world.

Our accommodations rivaled those of a first-class hotel. The stateroom was sizable and comfortable. The congenial cabin attendant left imaginative towel sculptures on our beds each night, ranging from a sturdy elephant to a graceful swan. On-board meals were as diversified and delicious as any we ate at restaurants throughout the rest of Egypt.

One of the most appealing attractions of a Nile cruise is that the river passes close to a number of the must-see archaeological gems that have been attracting sightseers since ancient Greeks and Romans came to Egypt to admire its structural riches. In addition, while land-based day trips during our weeklong voyage took us to some of the most prized places, our time spent on the boat also provided introductions to equally fascinating aspects of the people, life and culture of Egypt.

Whether peering through the oversized glass door that led outside our comfortable cabin or seated on our private deck, we were able to observe people going about their daily lives. We passed by tiny towns of modest mud-brick and concrete houses where women were grinding seeds into flour between stones as their ancestors did. We saw farmers working in fields using tools that might have been passed down for generations. We watched fishermen in tiny rowboats pulling in their catch and helmsmen steering feluccas, the traditional wooden sailboats used to ferry both goods and people.

Men sitting in the sun sipping tea and smoking a shisha (hookah) pipe watched us as we peered at them, while children playing at the river's edge jumped with joy and called out greetings, which we returned. After washing clothes in the river water, a woman gathered them into a metal pan, balanced it on her head and headed for home.

We also came to understand the importance of the Nile in the history, growth and everyday life of the people who live along and around it. Without the river, there would be no fertile land in Egypt, a scarcity of food for its people and little electricity to light their homes.

Given the scarce rainfall throughout the country, the Nile nourishes a narrow ribbon of verdant growth along its banks that quickly gives way to barren desert. It's little wonder that more than 90% of the country's population lives along that waterway on just 3% of its territory. Seeing the dramatic disparity between the ribbon of green and the otherwise arid wasteland through which it winds and observing villagers whose lifestyles have changed little over centuries would be reason enough to visit Egypt. Throw in its rich history and magnificent monuments to that past, and it's clear why the country ranks high on a list of must-visit places.

Fyllis and I have visited several of our bucket-list destinations with Overseas Adventure Travel, a company that offers "Small group adventures on the road less traveled" to 80 countries around the world. OAT lives up to its "Learning and Discovery" motto in a variety of ways that add both education and entertainment to the experience. In Egypt these ranged from ad hoc conversations with locals our guide encountered along the streets to discussions of controversial topics to shipboard entertainment based upon ancient traditions: www.oattravel.com or 800-221-0814.