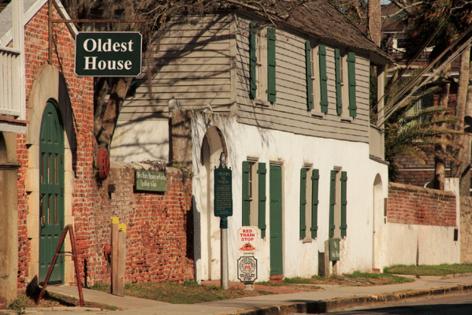 In 1607 a small band of settlers founded the first permanent English outpost in the Americas, Jamestown in the Colony of Virginia. At that time another town already had existed since 1565 in a different part of the New World -- making it the oldest continuously occupied European community in the country.

Given its history, St. Augustine, Florida offers visitors a setting that captures not just the stories but also an authentic atmosphere of its colorful past. That comes to life primarily in the city's 144-square-block historic district.

The Colonial Quarter is a good place to begin exploring. The neighborhood is a living history museum, with emphasis on the first word. A blacksmith, carpenter and other costumed historic interpreters combine facts with fun as they help onlookers relive the way things were over the centuries.

They recall the expedition led by Don Pedro Menendez-de Aviles, a Spanish admiral who arrived in 1565 and set up an encampment near a Timucua Indian village. That tribe was one of a number of Native American groups who began occupying the area some 10,000 years ago.

Menendez wasn't the first Spanish explorer to come ashore in the region. In 1513, Ponce de Leon led an expedition seeking to find and claim uncolonized lands, a journey that gave birth to the legend of the Fountain of Youth. A fable about vitality-restoring waters was familiar on both sides of the Atlantic Ocean, but there's no evidence that de Leon was searching for the potion. Somehow accounts of his supposed quest found their way into history books, however, and the story stuck.

The Fountain of Youth Archaeological Park occupies the place where Menendez encountered the friendly Timucua people and established the settlement that over time evolved into present-day St. Augustine. Attractions include a reconstructed portion of the village, ship building and other exhibits, and cannon and weapons demonstrations.

Other than a brief interlude (1763-84) when Great Britain gained control of Florida, St. Augustine remained under Spain's rule. That accounts for the prevailing Mediterranean architecture and other reminders of Spanish influence. By the time the United States took possession of the city by treaty in 1821, it already was 256 years old.

Reminders of those early years abound. The Gonzalez-Alvarez house, referred to as "The Oldest House," was constructed in the early 18th century. It was built in the Spanish Colonial style, with touches of Britain's Colonial architecture added when that country-controlled St. Augustine.

Records date the Oldest Wooden School House back to 1716. Speaking animatronic figures of the schoolmaster and pupils introduce themselves and describe a typical day of classes. One boy is wearing a dunce cap, the penalty for not knowing his lesson.