Find a Landscape You Love on the Island of Hawaii 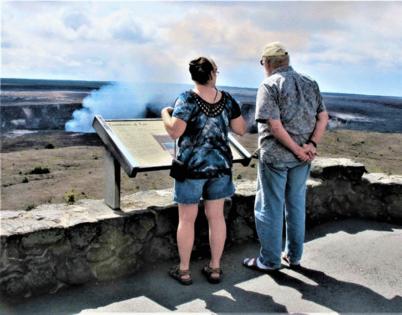 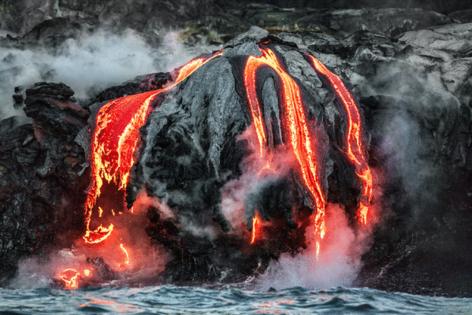 Some vacationers soak up sun on beaches with white or black sand. Not far away divers suit up for a deep dive to get close-up and personal with a variety of denizens of the deep. Other people check out a surreal moonscape of hardened pitch-black lava, then hike through a lush tropical rainforest.

If this sounds like a continent-wide choice of activities, that's because the island of Hawai'i (as locals spell it) in ways resembles a miniature continent. It's almost twice the size of the other Hawaiian Islands combined. Visitors find a setting that encompasses virtually every kind of landscape. Dry, cactus-dotted desert lies near lush rainforests. Barren lava fields contrast with waterfalls plunging into verdant valleys.

People in Hawai'i Volcanoes National Park come face to face with the world's most active volcano, Kilauea, and most massive active subaerial volcano, Mauna Loa. It has erupted 33 times in the past 75 years, most recently in 1984.

In recent times, Kilauea erupted from 1983 to 2018. During the 2018 blow, lava flows added more than 875 acres to the island and created a black-sand and pebble beach.

Visitors can view the newest eruption's billowing plume of gas and steam by day and bask in the reflection of glowing lava deep within the crater after dark. The hours from 10 p.m. to pre-sunrise are the best times to avoid large crowds.

Hawaii Island's massive mountains also have another claim to fame. From its base on the ocean floor to the summit at more than 13,800 feet, Mauna Kea is taller than Mount Everest. Because of their heights, the peaks of both Mauna Kea and Mauna Loa are blanketed by snow at times during winter.

Several attractions greet people taking the Crater Rim Drive through the national park. The Kilauea Overlook provides awe-inspiring views of the Kilauea caldera, the collapsed center of the volcano, and the Halema'uma'u crater. Ha'akulamanu is a thermal area where volcanic gasses deposit colorful sulfur crystals and other minerals. The aptly named Devastation Trail leads through an area that was buried beneath a covering of cinders during a volcanic eruption in 1959.

People driving in the park are cautioned to be on the lookout for the nene, which is the state bird of Hawaii. This is the rarest species of geese in the world and, found only in Hawaii, it is designated as threatened. Visitors are warned to drive with caution and not to feed the birds.

Along with volcanoes and the usual sun-and-sand vacation activities, there are plenty of other reasons to visit Hawaii Island. For fishermen, waters off its Kona Coast are known as the best in the world for catching giant blue marlin. An annual International Billfish Tournament attracts anglers from many countries.

Henry Chapman Mercer was an unusually accomplished and fascinating man who was born in 1856 and lived until 1930. He was admitted to the Pennsylvania bar but never practiced law. His ...Read More

I'd never seen a bathroom with such a tiny shower in it, and I wasn't quite sure about the closet-sized kitchen that was three steep marble steps down from the rest of the apartment. But...Read More