Exploring Venice One Morning at a Time 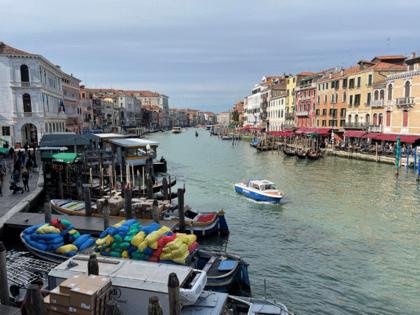 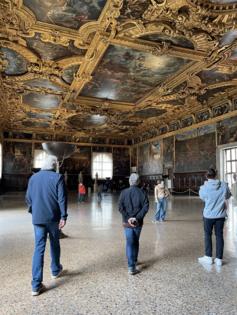 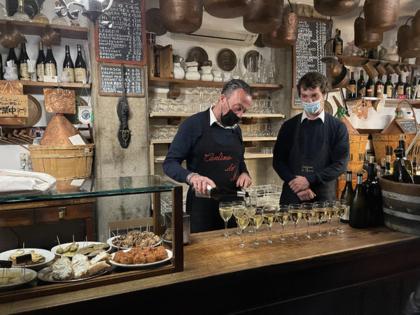 As my husband and I sat with our suitcases awaiting an early water bus to the Venice airport we had time to watch the city come to life. Cartons for delivery clattered past on handcarts designed for the narrow alleys of the city while boxes of flowers and fresh vegetables motored down the Grand Canal on boats made for narrow waterways. Smartly clad businesspeople hustling on their way to work dropped bags of garbage or recycling at carefully choreographed barges parked throughout the city. Other barges waited for bags of dirty laundry at hotel docks.

Such is the way this city begins each day. Later, bustling crowds of foreign visitors would crowd the streets; it is for them that the daily gears begin to grind. Sidewalk cafes prepare to make Aperol spritz and bruschetta. Gift shops set out Venetian trinkets for impulse shoppers. Tour guides gather their first groups.

It is with good reason that people flock to this watery city. My husband and I only had three days to take it in, so we had to pick carefully. Fortunately, we had cool temperatures, so the mosquitoes and canal odors of which we had been warned were not an issue. And our rented apartment sat at the intersection of four canals, where gondoliers paddled past under nearby arched bridges and occasionally blew kisses that made for postcard-perfect pictures.

Our well-situated apartment was conveniently owned by a Venetian guide whom we hired to show us around Piazza San Marco, Palazzo Ducale and the Doge's Palace. Having grown up in the very apartment we were renting, Monica Bittante told us that her grandfather had been the person to erect archangel Gabriel's shining golden statue atop St. Mark's Campanile, the bell tower of St Mark's Basilica, in 1912. As we walked on to the palace, she chatted with us about the doges' history.

For centuries Venice was a crossroads between the Far East and Europe. It was a place where textiles, foods, metals, leather, spices and other supplies were traded and was, thus, home to successful merchants who had immense wealth. These aristocrats elected the doge from among their own ranks. It was an honor bestowed on someone at the end of his career, but it was unpaid and came with few benefits. The doge, for example, could not leave the magnificent palace we were about to explore.

Before we entered, Bittante prepared us by saying, "This palace is an evocative museum -- a museum of atmosphere," and she was spot-on.

We walked up grand marble staircases under gold-leafed ceilings and through galleries where dignitaries would wait to meet with their doge. In these rooms large paintings told stories of the history of Venice -- all beneath shimmering gold friezes or hand-painted beamed ceilings.

In the Hall of the Full Council, a room the size of a large gymnasium, some of the 120 doges of the past peered down at us from portraits arranged around the top of the room -- all except one, Marino Faliero. His space is painted with a black drape in lieu of an image because of a coup he plotted that was leaked to the Great Council. They quickly beheaded him in 1355, and he was subsequently stripped from any record.

Only a few steps from that chamber we walked through a narrow passageway across the famous Bridge of Sighs, a walkway between the opulent wealth of the palace and a cold, frightening prison. No wonder it evoked sighs from those who crossed over.

Crack! went the gavel as the auctioneer announced I had won the five-day trip to Rome for an audience with the pope and a tour of the Vatican -- completely by accident. Having ...Read More