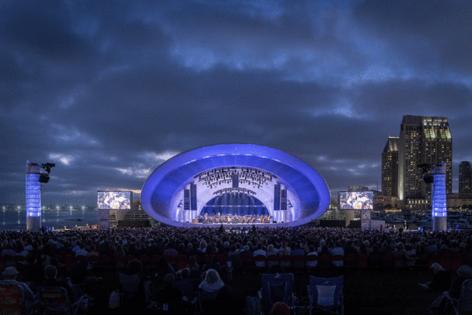 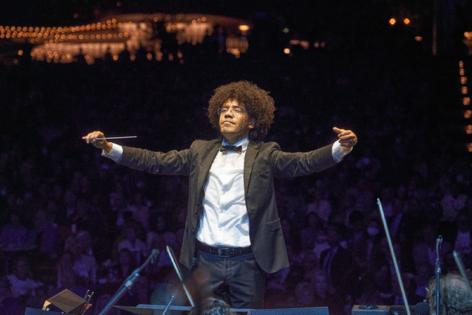 It's a perfect evening in San Diego, the setting sun casting a golden glow over the city's skyline. Along the waterfront a passing parade of visitors is admiring the mighty presence of the aircraft carrier Midway and the sleek hull and towering masts of the clipper ship Star of India.

At the same time, a mile or so to the south, a crowd of enthusiastic concertgoers is making its way to San Diego's newest waterfront attraction, the Rady Shell at Jacobs Park. It's the new outdoor home of the San Diego Symphony and its charismatic young conductor from Venezuela, Rafael Payare.

Skillfully conceived on 3.7 acres of former park land by Tucker Sadler Architects and Soundforms (which designed the performance shell), the visual impact of the venue is meant to reveal itself gradually. The first area you encounter after entering is an open-air food court featuring picnic-perfect items prepared by well-known San Diego eateries. At this point the full visual impact and magnitude of the shell remains a mystery.

It is only after ascending to the top of the gently rising slope at the rear of the grounds that the great reveal takes place and you have the chance to take in the overall impression of the shell, its peninsula setting, and 360-degree panoramic view of the city skyline, Coronado Island and Mission Bay.

From this grassy area, set aside for blanket seating (at $25), the tiered landscape slopes down gradually toward the shell. And it is only then, as you make your way toward the 4,800-square-foot stage, that the immense scale and graceful elegance of the shell with its luminous stretched white fabric skin becomes apparent.

These seating areas closest to the stage feature tables for four with a top ticket price of $108, where patrons have the option to order from a cooked-to-order menu prepared by host chef Richard Blais.

But while the view is awe-inspiring -- as the sun gradually sets, the stars come out, the city lights begin to twinkle and sailboats glide by -- it's the enveloping atmosphere of the music, enhance by the shell's superb sound system, that brings the whole experience together. The night I attended Payare led a classical program with works by Wagner, Schumann (his piano concerto featuring soloist Alexander Gavrylyuk), Beethoven's Symphony No. 7, and "Fate Now Conquers" by the rising young American composer Carlos Simon.

In Payare, the San Diego Symphony has found a music director who projects a dynamic presence on the podium, distinctly reminiscent of the Los Angeles Philharmonic's superstar conductor, Gustavo Dudamel. It's not surprising, since the two men share close cultural and musical roots.

Not only are Payare and Dudamel both from Venezuela, but they are also both graduates of "El Sistema," the remarkable, totally free public music education program founded by Jose Antonio Abreu. They have each conducted and toured internationally with the school's celebrated Simon Bolivar Orchestra. And during his student days, Payare was the orchestra's principal horn player.

For an orchestra to forge a bond with its audience, having a signature conductor at the helm is a must. With the introduction of Payare, the San Diego Symphony has boldly entered an exciting new era in its performing history.

Not many orchestras would dare to schedule outdoor concerts through December, but that is exactly what the San Diego Symphony is planning to do throughout the holiday season at the Rady Shell. Here is the orchestra's yule log: Nov. 13-14, principal guest conductor Edo de Waart will conduct a program of "The Russian Romantics"; Dec. 10, 11 and 12, a "Noel Noel" concert will combine the forces of the San Diego Symphony, the San Diego Master Chorale and San Diego Children's Choir. The series will end with two movie nights: "The Muppet Christmas Carol" in Concert, Dec. 18; and Disney's "Frozen" in Concert, Dec. 22. Just remember to bundle up.

Payare will return to the podium when the orchestra begins its 2022 winter season. At that time, however, the concerts will be indoors at the San Diego Civic Theatre while Copley Symphony Hall is under renovation.

For tickets and information: www.theshell.org

So began my first riding lesson at the Arizona Cowboy College in Scottsdale. After ...Read More

In the mid-1800s so much precious metal covered the ground in Nevada that prospectors could shovel it up. A century later an avian disaster struck bird life along the Louisiana coastline. Today ...Read More