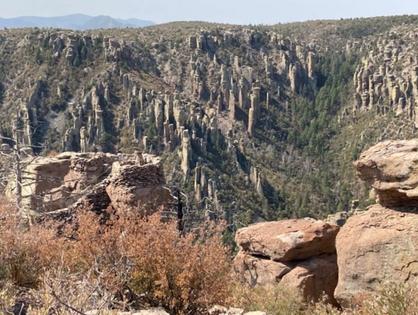 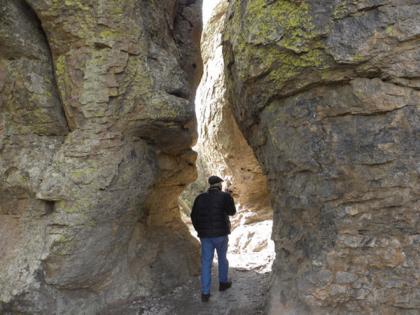 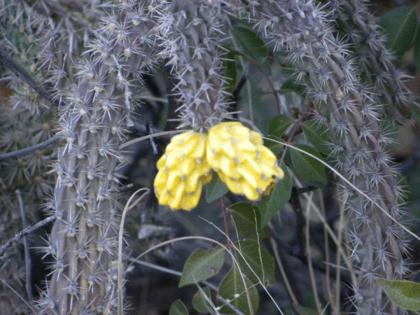 Whenever we've driven west, we have always tried to go through the small town of Willcox, Arizona, where for years we found the best coffee and cinnamon rolls anywhere. That shop has closed, but we still go to Willcox for coffee and hot cinnamon rolls, hamburgers and other good food served all day at the Roadrunner Kafe on Virginia Avenue at Willcox-Cochise KOA Campground. Willcox is popular in winter for snowbird RVers who come from northern states, and some spend all winter in Arizona.

The town is known because it was once a home of the Western singer-songwriter Rex Allen, who starred in many cowboy movies and earned a star on the Hollywood Walk of Fame. The Rex Allen Museum in Willcox features Allen's collection of memorabilia and is a fun place to visit.

But the main reason to visit Willcox is Chiricahua National Monument, a most unusual natural wonder. Nature has sculpted thousands of spires and columns here with rhyolite. These weirdly beautiful towering formations were made by ash from the Turkey Creek volcano, which erupted 27 million years ago. As the layers of ash cooled, they melded together, leaving piles of rocks stuck together in intriguing formations that appear impossibly balanced. After all those years, wind and weather continue to reshape these formations even today.

We drove through the 12,025 acres of the monument on a good roadway built by the Civilian Conservation Corps in 1934 during the Great Depression. The CCC was part of the New Deal created by President Franklin D. Roosevelt to provide good jobs to 3.4 million out-of- work young men. Here they learned such skills as surveying, carpentry, plumbing and engineering. Their determination and hard work yielded many of the lasting improvements in our national parks and monuments.

Bonita Canyon Drive, which was first surveyed, cut and built by these workers, climbs from the flat grasslands up the mountain that is like a sky island of forests. The varieties of evergreens changed as we ascended to Massai Point at 6,870 feet. This road provides an easy way to see these giant rock sentinels looking over the forests. Mountains here range up to 9,763 feet in height.

Seventeen miles of fascinating hikes run through and around the rock columns and spires. The visitor center at the entrance -- 35 miles southeast of Willcox -- has books, maps and friendly rangers to give advice about how to plan and enjoy time in the park. A wooded campground is open year-round for tents, trailers and RVs up to 29 feet long. Good restrooms are available in a couple of places, too.

At Massai Point we found a short, easy walkway, accessible for wheelchairs, that leads to an area overlooking thousands of these rock columns. It also leads to a display of exhibits telling history and interesting facts about the surrounding area. Massai Point itself looks out to another mountain where Apache chief Cochise is supposedly buried, and many people claim to have seen a profile of his head in one of the massive rock formations.

Since the 1400s, four main bands of the Apaches have lived in this area and named it "Standing Rocks." When Spaniards tried to move in and take away their hunting ground and nomadic homeland, they fought fiercely. Cochise, along with Geronimo, led many forays against pioneer settlers who invaded their lands, and Fort Bowie was built to protect the settlers. In 1886 Geronimo surrendered, and the Apaches were relocated eventually to reservations in Oklahoma and New Mexico.

In 1888, Emma and Neil Erickson, immigrants from Sweden, settled here. In 1917 their daughter, Lillian, and her husband, Ed Riggs, decided to turn the family homestead into a guest ranch. Western tourism was becoming fashionable, so from then until 1973 visitors came to stay for a while. The owners created trails and led guests on horseback through the magnificent sights of the Chiricahuas. Bird-watching in the area became quite popular and still is today. The original homestead is preserved by the National Park Service as Faraway Ranch at Bonita Canyon and is open for touring.

Crockett's Breakfast Camp in Gatlinburg, Tennessee, which churns out huge home-cooked breakfasts and a fascinating hillbilly history, honors the work of the dedicated frontiersman and soldier David ...Read More

Mention Chincoteague Island, Virginia, and you're likely to be asked, "Isn't that the place where those ponies are?" The answer is yes. The narrow spit of land and nearby Assateague Island became ...Read More