History Is on the Menu at 'Hemings & Hercules' Dinners 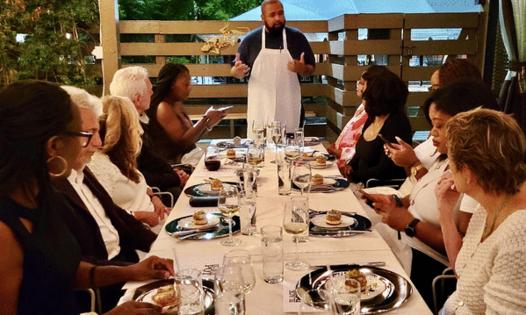 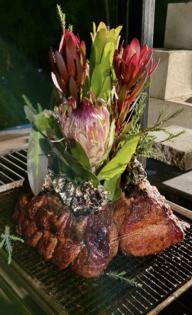 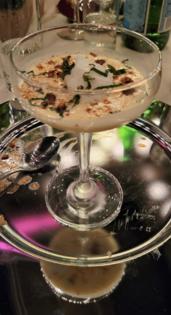 The first thing you need to know about the "Hemings & Hercules" dinner at Post and Beam in Los Angeles is that it is an eight-course tour de force of open-air, wood-fire, cast-iron cookery dedicated to two of America's first celebrity chefs -- James Hemings and Hercules Posey. The second thing you need to know is that both men were African American slaves owned by two of our Founding Fathers -- George Washington and Thomas Jefferson.

I first became aware of this little-known aspect of America's culinary history when I watched the third episode ("Our Founding Chefs") of the Netflix series "High on the Hog: How African American Cuisine Transformed America." It introduced a pair of Los Angeles chefs (Brian Dunsmoor and Martin Draluck) who were dedicated to providing an intimate dining experience that could combine the story of "Hemings and Hercules" with a succession of sumptuous dishes prepared in the blazing-hot, open-hearth "hard-cooking" tradition of early America.

Originally conceived in 2019 at Hatchet Hall (on the city's west side), the dinner has now found a new home at Post and Beam in the Crenshaw District, where it is being presented by the restaurant's co-owners and chefs, Draluck and John Cleveland. It is the result of two tracks of research: one into the lives of the two men, the other into the cultural anthropology of American Colonial cookbooks and cooking techniques. In fact, says Draluck, many of the recipes that Martha Washington took credit for in her famous cookbook were almost certainly originated by Posey.

Conceived as a limited (family style) experience for 18 guests, every aspect of the evening is meticulously choreographed -- from the execution of each course on the smoke-billowing open fire (which guests are encouraged to come back and observe) to the informative introduction to each dish by Draluck. The dinner features an accompanying flight of excellent wines from the African American-owned winery Brown Estate in Napa, all set to a perfectly matched playlist of city and country blues that plays in the background.

The moment you enter the restaurant you are handed a glass of champagne and encouraged to sit around the fire pit and meet your fellow diners. Once the initial ice begins to melt, the setting inspires a sense of spirited excitement as each beautifully presented course arrives, climaxing with the presentation of a pork crown roast aburst with floral adornments. It's hard to imagine that food of this delicacy and complexity could be prepared in such rustic conditions, which gives the dinner its alternate name as the "Black Pot Supper Club."

When I went, the dinner began with black-eyed pea pancakes with pickled greens and red pepper jelly. That was followed by a delicate salmon with sweet-and-sour melon, smoked corn cream and basil; headcheese cooked over several days and served over griddled toast topped with yellow cheddar and grain mustard; beef pepperpot (short rib, sweet potato and serrano vinegar); braised rabbit with toasted middlins, roasted vegetables and Madeira; and a palate-cleansing cocktail -- Cato Alexander's mint julep (made with Remy Martin 1738 cognac). The spectacular roasted pork crown roast with sides of macaroni, cream, butter, black pepper Parmesan fried potatoes, tomato jam and chives followed that. Then came wood-roasted vegetables and finally pickles and hot sauce served from an eyedropper. It all ended with the one dish confirmed to have been created by Hemings -- the lighter-than-air dessert, Hemings' Snow Egg served with peaches, basil and toasted almonds.

Course by course, Draluck told us about the lives of James Hemings (older brother of Sally Hemings) and Hercules Posey, whose last name was that of his owner before he was "acquired" by Washington. We found out that Jefferson (an epicurean of the first order) took Hemings with him to France, where he had him trained in French cooking techniques, and learned that Posey developed a reputation as a dandy and was allowed to shop at the markets of Philadelphia on his own but was never allowed to remain in the first American city to outlaw slavery long enough to qualify for his freedom.

"These dinners give us a chance to tell their stories," Draluck explained. "The food these men created lived on while their own lives and legacy remained hidden in plain sight. We know it's a touchy subject that some people don't want to talk about. We also think part of understanding the history comes from being able to see exactly how we're doing the cooking -- to feel the heat of the fire and smell the smoke, to see the food sizzling on the grill and the cast-iron pots bubbling."

The cost of the "Hemings & Hercules" dinner is $180 per person. The price includes the accompanying wine flight and gratuity: www/postandbeamla.com.

Experts predict that in 2021 people around the world will take about 1.4 trillion photographs, many of them while traveling. That estimate, by the digital imaging consulting firm Keypoint ...Read More

Head north 7.4 miles from the Grand Lake entrance to Rocky Mountain National Park and you come to a rather innocuous-looking parking lot and campground. In fact, you've discovered one of the park's most fascinating ...Read More

In February 1928 an astounding feat of railroad engineering was completed when the first locomotive passed through the 6.2-mile-long Moffat Tunnel, connecting the eastern and western sides of the Continental Divide in ...Read More

People are funny about birthdays. Some like to ignore them completely, others crave a big celebration, while others (whether they like it or not) have them sprung on them by surprise.

For many years a critical part of my ...Read More