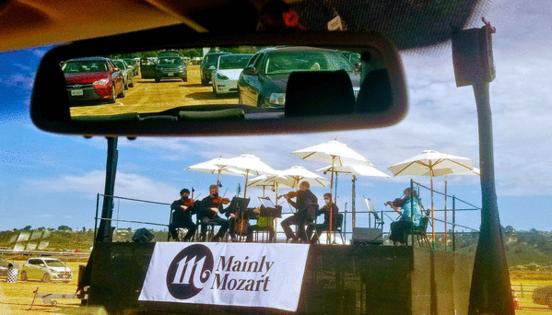 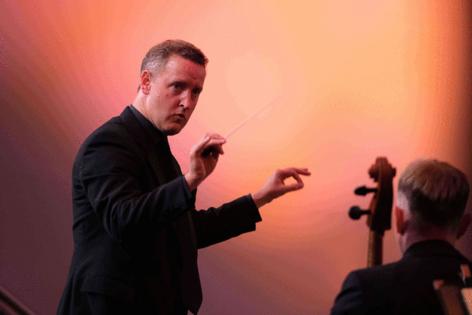 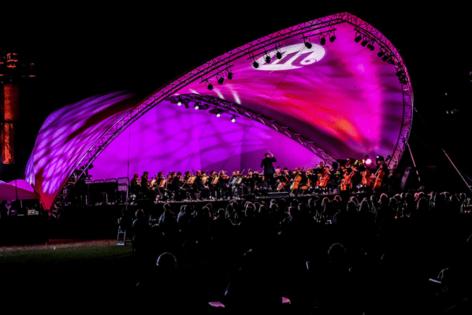 For more than three decades Mainly Mozart and its annual festivals of all-star musicians and soloists remained San Diego's best-kept secret. It took a disaster to change that. Throughout the darkest months of the COVID-19 pandemic, while other performing arts organizations were in duck-and-cover mode, Mainly Mozart made the heroic commitment to keep live classical music alive. And in doing so, ironically, for the first time they gained national attention.

It was an improbable story of survival, ingenuity and an ample dose of chutzpah that began on July 11, 2020, in a dusty parking lot and climaxed on June 20, 2021, as a capacity post-COVID-restrictions audience gathered on a vast grassy field to celebrate the finale of a five-day festival conducted by Mainly Mozart's music director, Michael Francis.

At a time when California was in shutdown mode and myriad health restrictions were in place, Mainly Mozart decided to take a stand. The question was how to safely present a live performance for more than 10 people? Was it even possible? The model turned out to be that icon of American pop culture -- the drive-in theater.

Armed with a full-steam-ahead mindset and a Judy Garland-meets-Mickey Rooney "Let's put on a show" level of determination, CEO Nancy Laturno set in motion a plan to present the nation's first drive-in concert of classical music.

Confined in their cars, that first audience watched as eight masked and socially distanced musicians from the Los Angeles Philharmonic and the San Diego Symphony performed music by Mozart and Mendelssohn under umbrellas on a makeshift stage. Despite the awkwardness of the arrangement, the rapport between artists and audiences that had been taken away for so long came rushing back. And when the last (amplified) notes faded away, the audience showed its overwhelming approval -- not with a boisterous round of applause, but with a cacophonous chorus of honking car horns.

Mainly Mozart's drive-in experiment could have ended there. It did not. And on Oct. 22, 2020, the company inaugurated its new and improved venue at the Del Mar Fairgrounds. It included paved parking for up to 350 cars, representing an audience of well over 1,000; a canopy-covered stage large enough to accommodate an entire chamber orchestra; an enhanced sound system (with FM radio simulcast); and a pair of shimmering billboard-size video screens that flanked the stage.

In preparation, invitations were sent out to principal players and concertmasters around the country. The response was immediate. Musicians who had been forced to endure months of solitary confinement were eager for any opportunity to perform -- especially for a live audience. The final roster read like a Who's Who of America's orchestras with players coming from the New York Philharmonic, the Metropolitan Opera Orchestra, the San Francisco Symphony, the Cleveland Orchestra, the Philadelphia Symphony, the Los Angeles Philharmonic and others.

To ensure safety, rigorous testing procedures, social distancing and masking were required as rehearsals began. Then, just as opening night arrived, a thick blanket of fog rolled in and enveloped the stage. Nevertheless, Francis boldly raised his baton and launched into Antonio Vivaldi's "Four Seasons."

Challenging as the conditions were, the concert was an unquestionable success. Even the craziness of the fog seemed somehow appropriate for an organization where overcoming adversity was standard operating procedure.

At a time when larger, less-agile organizations had retreated to the Internet, sending out performance captures of masked musicians and no audience, Mainly Mozart motored on, presenting a succession of drive-in festivals in February and April. No longer San Diego's best-kept secret, coverage began to appear in national publications such as Newsweek and The Wall Street Journal.

Some people traipse through lovely landscapes as others explore history from the days of Native Americans to the present. Avid birders use binoculars to spot colorful feathered friends in flight ...Read More

As you follow the hilly, curvy road that snakes through Yosemite National Park in California, every turn elicits another "wow" moment. It's not easy to decide which view best demonstrates the appeal...Read More

When I encountered my first giant sequoia in the Mariposa Grove, my head did not tilt back far enough to see the top and walking around the trunk practically required a GPS. Leaving noise and ...Read More

On the second night we were at the Tambopata Jungle Resort in Peru, our guide, Juan, took us for a boat ride to spot caimans. He used his big flashlight to spot the beady eyes watching us ...Read More