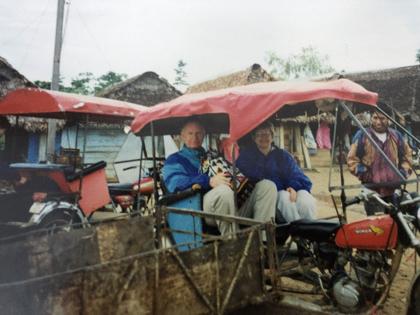 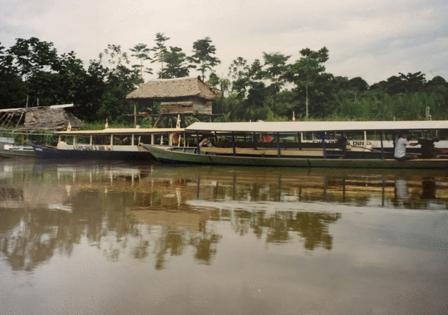 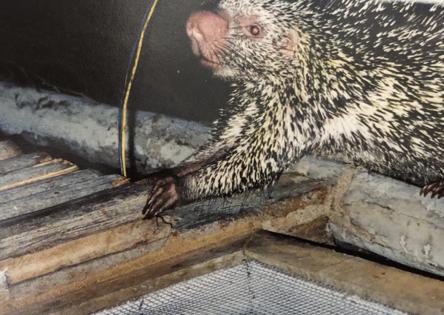 After a week in Lima, Peru, we boarded a small jet to fly over the Andes. When we landed in the jungle town of Puerto Maldonado, our guide met us and threw our luggage into the back basket of a sort of motorcycle with places for two passengers behind him. We zoomed away toward what we thought would be a first-class ship for a four-hour cruise up the Tambopata River.

Five minutes later the river's swirling, muddy expanse came into view. It was wider than any we had ever crossed in the United States, lined on each side with dense jungle vegetation. The docks were a rough-hewn platform where we and 10 other travelers climbed into a large flat-bottomed canoe with 18 folding chairs lined up beneath a blue plastic tarp. This was our cruise ship.

The motor whirred reluctantly, and we were off upriver. Captain Juan explained that the river had risen 40 feet in the last week because the rainy season had begun, and this would slow our progress.

We puttered along, staying far away from the shoreline despite having no life jackets aboard and stopping occasionally for passengers and supplies. We never passed any sign of human civilization, just a thick wall of verdant palms and other exotic vegetation on each side of the enormous river.

At one point we were startled by the screechy microphone announcing above the motor's noise that we would be stopping for a terrorist checkpoint. We had to give all of our names to the Army here in case anyone went missing later.

"There is terrorist activity everywhere up here," Juan told us matter-of-factly.

Two men took our names and said a few words to him before waving us on and releasing the rope that held our boat to the dock. Back downriver we went, swiftly carried by the raging current as he pulled the motor's starter cord.

The engine coughed and nothing happened. He repeatedly yanked the cord as we regressed at about three times the speed we had been making upstream. By way of asking for help, he repeatedly whistled loudly into the impenetrable palm forest. Soon a man in a small motorboat came to rescue us. We sailed swiftly past him, but he finally caught us a few miles downstream.

With one sandaled foot in his boat and one in ours he beat on our motor with a hammer and turned something with pliers repeatedly. After a few minutes it began to sputter and burst into life. With a grin and a handshake the man was gone, and we were on our way upriver again, having lost many miles.