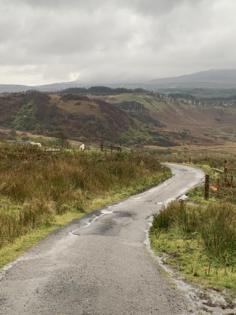 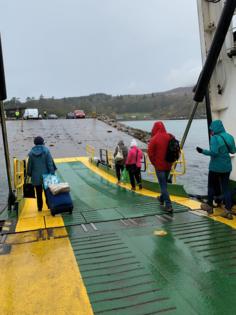 "If you're going to get sick, be sure it's on a Wednesday," my Isle of Eigg tour guide-driver Brian Greene said. "That's the day the doctor arrives by ferry from Skye."

Greene was filling in for Charlie Galli, this Scottish island's usual taxi driver (and only source of public transportation), who was stuck on the mainland for a week awaiting space for his van on the ferry to return home. So Greene, who has lived on this 3- by 6-mile Inner Hebrides island since 1979, had volunteered his car to drive my husband, Carl, and me on the single-track road around this gorgeous green area, affectionately dubbed the "People's Republic of Eigg" by its population of 109.

Following an unhappy laird -- "estate owner" -- leadership history (long story), since 1997 the island has been owned by the Isle of Eigg Heritage Trust, a community ownership that raised $2.5 million from 10,000 individual contributions and one extremely generous anonymous donor. As Britain's most eco-friendly island, it boasts the world's first fully renewable powered electric grid, generating its own electricity from a combination of wind, hydroelectric and solar. It has more sheep than people -- and roaming cows known to block the narrow road and testing drivers' patience.

Backing up a bit, you may recall seeing Eigg (pronounced "egg") profiled on "60 Minutes" in November 2017. It's "some really obscure place that you've never heard of and are not likely to visit," commented correspondent Steve Kroft in his introduction.

"I want to go there!" I exclaimed to Carl after we watched the entertaining episode about the island's charming and resilient -- yet quirky -- residents.

I had no idea that just two years later, in November 2019, we would be here as curious, traipsing tourists -- for about two hours.

Until COVID hit, some 11,000 visitors would come here each year via ferry -- mostly as day-trippers, as we were, since accommodations are few. Tourists hike the white, sandy beaches; enjoy bird-watching, lobster-fishing, daytime boat cruises, kayaking, stargazing -- just relaxing.

After taking the overnight Caledonian Sleeper train to Scotland from London, we had started our journey in Fort William at the Alexandra Hotel conveniently located next to the train station. We took another train 90 minutes up the scenic coast to Mallaig, a tiny fishing village, where we caught the Caledonian MacBrayne ferry for the 80-minute sail to Eigg, 10 miles off the western coast.

I counted only 10 passengers onboard. There were also two vans and a few cars -- which belonged to residents since "outsiders" cannot take cars to Eigg. It's either walk, hire a bike, hitchhike - or book Galli's taxi when he's in town.

The sounds of slot machines vie for attention with excited cries of winners at gambling tables nearby. Meanwhile, silence reigns at farms where horses rather than tractors pull plows. Welcome to ...Read More

Some vacationers soak up sun on beaches with white or black sand. Not far away, divers suit up for a deep dive to get close-up and personal with a variety of denizens of the deep. Other people check...Read More

Just as the queasiness in my stomach from the continuous onslaught of curves and cutbacks along the narrow uphill road began to subside, we rounded yet another 180-degree bend. The first waterfall...Read More

After more than a year of the pandemic lockdown, we've planned a June trip to Anguilla, a Caribbean island known for its gorgeous beaches and great food. We've booked a house at Long Bay Villas...Read More

By Bonnie and Bob Neely

When we moved to Greenville, South Carolina, we had no idea how popular the area had become since Bonnie was a child growing up here. Now Upstate South Carolina is one of the top ...Read More