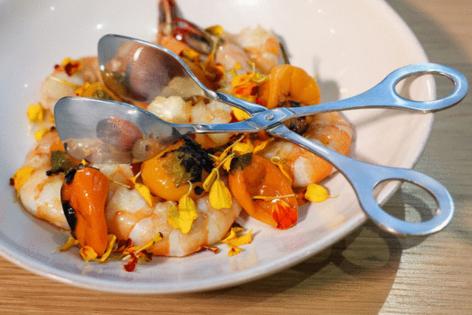 Carrot scraps, watermelon rinds, coffee grounds, bitter fruit pith and everything else you've most likely thrown into your garbage are on the menu at Slow Burn, though you'd never recognize them as such. Fermented, dehydrated or otherwise preserved, they wind up in glass jars and bottles of all shapes and sizes at chefs Andy Doubrava and Tiffani Ortiz's new roving dinner series that aims to serve sustainable meals using every last bit of every ingredient.

This fall and winter Slow Burn will blaze a trail through the Bay Area, back down the coast to pop-ups in Los Olivos, Lompoc and New Cuyama, then to a series of cities in Canada. To their car the couple will attach a trailer full of their carefully packed jars of fermented sauces, pickled produce and whatever else they've smoked and preserved, then travel from kitchen to kitchen. Whatever isn't utilized at one event will appear on the next menu, or the next — sometimes as an oil, sometimes a relish, sometimes as part of a dessert in the name of creative waste mitigation, and hopefully, building awareness and community around it.

"I feel like whatever restaurant I work in, I always end up near the dish pit in some way, and to watch half the food come back on the plate and it just goes into the garbage — it's like, there's got to be a better way to do that," said Doubrava, who recently left his post at Santa Monica's Rustic Canyon to pursue the project. "A restaurant that is good about waste [management] is still throwing out 50 pounds of food a day, easily, and it angers me and it makes me feel like I'm not doing my job right."

Before Slow Burn's launch in the fall, it started taking shape in summer of 2017: Ortiz, who moved to Los Angeles from New York City, was living on a farm in Malibu and burnt out from years in professional kitchens. She reconnected with Doubrava, whom she had met at the French Culinary Institute years prior, and it didn't take long for a romance to begin. In an effort to explore cooking beyond life in professional kitchens, and to foster a more direct link between growing food and immediately serving it, the pair set out on a brief tour around the country volunteering and cooking on farms, trading their manual labor for room and board.

The nomadic lifestyle, a closed loop between farming and cooking, and a sense of community was a dream for the couple, but it ultimately proved untenable as their work nearly always went unpaid. Still, their months working farmland and forging those relationships planted the seeds of what would become Slow Burn.

As they traveled, they developed an understanding of how small decisions in farming could make a big impact: water conservation, composting, crop spacing — how these choices could affect output, and flavor. They began to question food-system norms upon their return to kitchen life, including waste management.

Doubrava returned to Rustic Canyon, already one of L.A.'s high-water marks for creatively utilizing every morsel; while there, he pushed the boundaries even further, developing in-house charcuterie programs and expanding its fermentations. Ortiz worked a series of culinary jobs in and beyond L.A., including an inspiring stint at Montana's Campione Roman Kitchen, which allowed her to run "weird, guerrilla-style pop-ups" on the evenings the kitchen was normally closed. Through it all they continued to envision a future where their travels and back-to-the-land cooking could one day sustain them. In their downtime, they experimented with pickling, smoking, dehydrating and other means of preservation, jars of what would become the start of Slow Burn's larder gradually taking over quadrants of their Santa Monica apartment.

This fall, the pair decided to take the leap and launch into Slow Burn full-time, leaving their jobs and building upon their previous, sporadic pop-up series, Uprooted. They announced Slow Burn on Instagram, detailing their ethos of waste reduction in and out of the kitchen: In food cost, roughly 65% would wind up on guests' plates with around 35% going toward future meals; unpreserved food scraps would be composted or used to dye merch; soaps would be made from kitchen grease. Invitations to other chefs' restaurants poured in from around the globe, booking guest appearances for Slow Burn through the end of the year, and with more messages than they could even respond to. As they released tickets to their first events, they found guests were eager to purchase, regardless of their familiarity with sustainability-driven kitchen models.

"We got feedback where people didn't know what sustainability and food even meant," said Doubrava. "They didn't understand our mission, and I just assumed that everyone talks about this, right?"

Education is one of the greatest hurdles in explaining Slow Burn, but also part of the excitement. Much like the ever changing menu — which depends upon hyper seasonality, the readiness of select jars from their larder, and whatever ingredients might be left from previous iterations — the understanding of food waste varies wildly from table to table, and Ortiz and Doubrava love those moments of explaining the purpose to their guests.

"In California it's so easy to kind of get into that mindset where it's just like, 'Everybody knows what closed-loop means or what a biodynamic farm is,' but [those are] a lot of really big scary words for people who don't hear them all the time," Ortiz said. 'The dialogue is going to be different everywhere we go."

The basic concepts, they say, are familiar to most of their customers: Chefs already try to use ingredients for maximum profit — they just invest the extra time and, in the case of their home apartment, space to store fermented goods, extending the life of nearly every ingredient. Sourcing directly from farmers is another topic many are aware of, and even respond in kind, trying to do this for their own home kitchens.

Doubrava and Ortiz use what space they can in their home, which is stocked with jars of ferments and dehydrated produce; a small smoker on the patio has lent a perpetual scent of rich garlic to the air. Their months — and in some cases, years — of fermentation began to pay off when the couple took over Leora cafe in Beverly Hills on select weekend evenings in November with a series of tasting-menu dinners, then moved to Santa Monica's Lady & Larder for a more casual sandwich pop-up.

As they take their show on the road, the duo are fighting to keep fossil fuels out of the picture as much as they can. So they cook with electric stoves and portable induction burners everywhere possible; multiple appearances use nothing but live fire. And when it comes to offsetting the gasoline required to drive from one event to the next, they calculate their carbon footprint and donate money to Carbonfund to offset it.

In Beverly Hills, at the start of Slow Burn's run, the dinner began with a tea made from passion fruit skin, which is usually discarded but here was blanched multiple times, then steeped and augmented with hibiscus for a complex, tangy way to wake up the palate; the passion fruit's pith, it turns out, had already been made into an edible jelly, while the seeds would later be mortared and combined with lemongrass, essential oils, sea salt and cane sugar to form a passion fruit face scrub under Ortiz's Novella Curio, a catch-all lifestyle line of candles, plates, scents and body products.

The rinds from the dessert-utilized watermelon, typically discarded in most kitchens beyond the South, here were pickled and candied, then added to a perilla-leaf wrap filled with fennel-pollen-cured coppa, all topped with carefully tweezered anise hyssop. (As is often the case with Slow Burn's ever-changing menus, a future dinner would transform the herb topping into an oil, used in a hot toddy at a later event.) Between the chefs and the dining room, a row of jars glowed.

"It's a hefty haul," Ortiz said, gesturing to the row of culinary apothecary lining the refrigerated case near the coffee shop's register.

Doubrava and Ortiz doubled over their makeshift stations, plating shrimp with delicate marigold petals; potatoes swimming in a foamed cheese sauce; and succulent, juice-oozing pork with a dehydrated mushroom powder the pair use for wallops of umami — working separately at times, in tandem at others, regularly checking in with each other for reflections on taste and presentation.

"It's really hard to put what we do in a box," Ortiz said, preparing for their first dry run of dinner service. "I had to put 'international food' on our Tock page because how do you explain to people the weird s— we're doing sometimes? It doesn't sound good when you say that we're fermenting rhubarb, but it's kind of one of those things where when they're here, they understand."

The sustainable mindset doesn't end at the food; it trickles down to plateware (Ortiz inlays crushed leftover abalone shells into cement to form plates), handmade soy candles, and even the labor and dining experience. Slow Burn's tasting-menu pricing includes gratuity, so in lieu of tipping, it offers an option to pay someone else's way for a future dinner, drink or snack. "It enabled us to continue to get the word out by inviting people to dinner," said Ortiz. "We just do a blast on Instagram, like, 'Hey, we have a free dinner available,' or, 'We have free bar snacks available,' and people would come in and be so excited because some stranger bought them dinner. Then when they would get the check for $0 with that same QR code, they would give forward — so we always had this endless cycle of people who are eating for free, but not."

Earlier this month, Ortiz and Doubrava brought an iteration of their pop-up to Santa Monica's Lady & Larder for an afternoon of sandwiches bursting with color, flavor and local produce blended, smeared and ground into every bite. For a mortadella sandwich, the pair made a carrot mustard using the spent carrot ends from a previous tasting menu, puréed in a food processor with pickled mustard seed and aioli. Local outfit Céor Bread crafted bread out of leftover dehydrated Smallhold mushrooms from a Slow Burn vegan dinner, creating a mushroom-scented black rye for a smoked-mushroom and sunflower-cheese number.

Eventually, the couple said, they would love to pop up with sandwiches regularly, both out of love for the more casual menus and out of fairness for those who wish to try their cooking.

"We do the tasting menus because it's easy for us to control waste, but we are also very conscious of how much money people can spend," Ortiz said. "We don't want to have potential guests feel isolated financially, so doing a sandwich pop-up helps us to get our message across in a more casual way."

After all, what drew Doubrava and Ortiz to the concept of closed-loop cooking wasn't simply eliminating waste — it was community, and a community effort to reach the goal of a more sustainable food system. Community and zero-waste conversations can't be built by tasting menus alone, though at least with Slow Burn, it's a start.

Whether or not you are a travel obsessive, you know what one sounds like.

This is someone who'll eagerly tell you which mileage-reward program to choose, when renovations will be done at LAX, where to sleep in San Diego, ...Read More

Travel by air skyrocketed toward pre-COVID levels ahead of Thanksgiving — and even exceeded 2019′s numbers some days.

Thanksgiving week has always been the busiest travel season of the year, and experts expect the number of people flying and hitting the road will be close to what it was before the pandemic.

Traveling abroad can be complicated, but for Indians living in the United States on work visas, making trips home often feels unfeasible.

“I know many families who couldn’t visit their home when their parents passed ...Read More