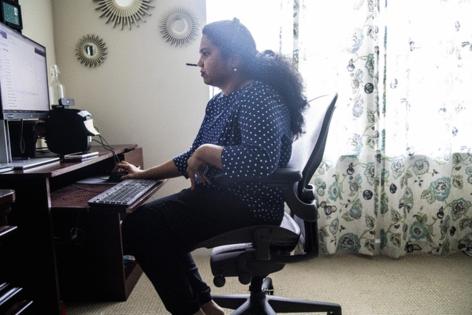 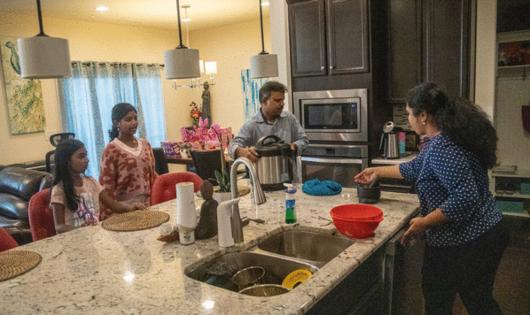 Traveling abroad can be complicated, but for Indians living in the United States on work visas, making trips home often feels unfeasible.

“I know many families who couldn’t visit their home when their parents passed way because of these visa issues,” said Maharajan Shunmugam, a software engineer in the North Carolina town of Morrisville. “It’s like we are stuck.”

Shunmugam, 42, is here on an H-1B, the country’s largest temporary work visa, reserved for high-skilled employment. He moved in 2013 from the Indian state of Tamil Nadu with his wife, Archana Gopal, and their two daughters.

Around three-fourths of H-1B recipients are Indian nationals, and though the H-1B is meant to be temporary, hundreds of thousands continue working on this visa for years as they progress through a green card process that moves at a glacial pace.

Whenever most H-1B workers wish to go abroad, they must get their passports stamped. But scheduling visa stamping appointments at U.S. consulates or embassies in Indian cities takes much longer than it does in most other international cities.

According to the U.S. Department of State, current wait times for stamping appointments in Mumbai, Kolkata, New Delhi and Hyderabad are each more than 300 days. This means that if a visa holder were to travel to India today, it would take at least this long before they could reenter the United States, plus processing time.

“You don’t know what they’re going to (need to) finish processing,” said Patrick Hatch, an immigration lawyer with Hatch Rockers Immigration in Raleigh. “If they requested more information afterwards, or they just need to do some security clearance. It could be weeks waiting to actually pick up your passport.”

For international comparisons, recent wait times for visa stamping in Beijing is three days, Rio de Janeiro is one day, Paris is one day, and its same day stamping in Nairobi.

During the pandemic, staffing shortages affected State Department consulates across the world, said Sharvari Dalal-Dheini, the director of government relations at the American Immigration Lawyers Association.

“Certain consulates have been particularly impacted, and I think India is one of those because of the sheer volume of individuals,” she said.

Appointment wait times at consulates in India have actually fallen in recent months. It wasn’t long ago that waits exceeded two years. And Hatch has heard from Indian clients who say they booked stamping appointments earlier than what the State Department website displayed.

But the logistics of a trip to India can still feel daunting, and many worry what would happen if there’s an emergency at home. Gopal’s parents, for example, still live in Tamil Nadu.

“That is the fear of me every morning I wake up,” Gopal said. “I pray that my parents do not fall sick during this time.”

Shunmugam counts himself lucky that he was able to book a visa stamping appointment for later this month. It’ll be his first time back in India in three years.

He plans to spend a month visiting his grandparents and sister’s family. Gopal and their girls will stay in Morrisville, knowing that any delay in India would disrupt their work and school schedules.

But a change could be on its way.

In late September, a Presidential Advisory Commission on Asian Americans, Native Hawaiians and Pacific Islanders unanimously recommended visa holders get their visas stamped in the United States upon their return, rather than have to wait in India.

According to Hatch, taking the stamping from consulates in India to consulates in America would “make travel so much easier and let families reunite.”

“People would get the (visa) sticker and be able to leave the U.S. and come back without any of the risk of the horror stories that people hear.”

Dalal-Dheini said the United States used to stamp visas in the United States before 9/11 and that the American Immigration Lawyers Association has been advocating for a return to the pre-9/11 system for more than a year.

But the commission’s recommendation is just that. It will now be up to the Biden administration to decide how to proceed.

Shunmugam said he’s optimistic as he follows what happens next.

ATLANTA — Delta Air Lines is preparing to handle more than 5 million passengers over Thanksgiving week, one of the busiest travel periods of the year and what is expected to be the heaviest Thanksgiving traffic Delta has...Read More

China said it would hit back at nations that placed COVID-19 restrictions on its travelers for “political goals,” showing the coronavirus remains a politically sensitive subject in Beijing even as it lets the virus run...Read More

China may be reopening, allowing its 1.4 billion people to come and go largely without restrictions, but just as it is, a slew of other countries are tightening measures for travelers from the world’s second-biggest ...Read More

The jet era that globalized air travel for half a century was brought to an abrupt halt with COVID. Now, planes are back in the skies, but flying’s proliferation is in reverse: Fewer aircraft are plying a smaller network...Read More