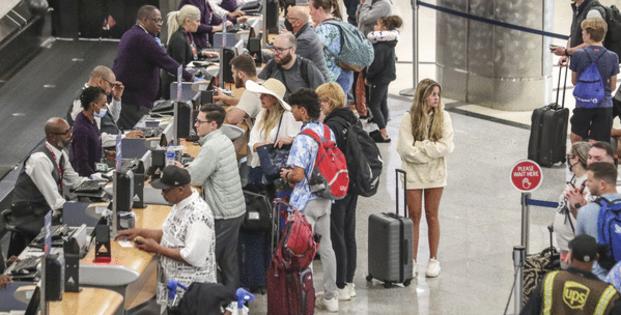 ATLANTA — Delta Air Lines is preparing to handle more than 5 million passengers over Thanksgiving week, one of the busiest travel periods of the year and what is expected to be the heaviest Thanksgiving traffic Delta has seen since the start of the pandemic.

The Thanksgiving period will present a major test not only for Delta but all major airlines, which struggled to handle crowds of travelers over the summer. Atlanta-based Delta canceled hundreds of flights as passenger demand rebounded from the depths of the recession and blamed staffing issues that prompted it to slash flights. Although the airline has been hiring more staff, new employees have had to go through training and gain experience in their jobs.

“We pushed a little too hard,” Bastian said. “We had to scale back.”

But Bastian pledged that the airline will be prepared for the holiday rush, saying the airline has hired 25,000 employees since the start of 2021.

The American Hotel & Lodging Association said it expects more travelers in hotels this Thanksgiving, with a survey showing 31% of travelers over the holiday plan to stay in hotels, up from 22% last year. The survey also showed that 66% of respondents are less likely to fly this holiday season as a result of concerns about delays and cancellations.

The Thanksgiving and Christmas travel season also comes as the pilots union pushes for a new labor contract at Delta. Delta pilots last month voted overwhelming in favor of authorizing union leaders to call a strike in the event negotiations come to a head.

The pilots union would have to clear a number of hurdles before it would be granted the right to strike under the Railway Labor Act, which governs airline and rail labor relations.

Before a strike would be allowed, the National Mediation Board would have to decide further mediation would not be successful, release the two sides from mediation and offer arbitration, followed by a 30-day cooling off period.

During an appearance on NBC’s Today show on Monday, Bastian said there’s “no possibility” pilots could go on strike at Thanksgiving or Christmas. “We’re actually a lot closer than people like to think in terms of trying to get this deal done, hopefully soon.”

That rankled Delta pilots union leader Jason Ambrosi, who told pilots “the law absolutely allows for self-help when released by the National Mediation Board.”

“We are committed to exercising our legal rights...up to and including a strike if necessary, to achieve an industry-leading agreement. The traveling public is watching and should be wary of blanket assurances from airline executives,” Ambrosi told pilots in a memo. “With the strike ballot approved, the steps in the RLA will play out based on what occurs during the next few week. ... Either progress is made at the table and we ink the industry-leading contract we have earned, or we receive more empty corporate platitudes and take the next steps to ensure our voice is heard,” he added.

The pilots are the only major unionized employee group at Delta.

After slashing its staff during the pandemic, Delta’s hiring blitz means about a quarter of the airline’s employees have joined the company over the last two years, according to Bastian. That’s driving a cultural shift, he said.

“We have hundreds of thousand of years of service that retired and we have a whole new generation coming in,” Bastian said.

During the pandemic, Delta hired its first chief health officer, Dr. Henry Ting. At the safety conference, Bastian said Delta is now focusing more on the mental health and emotional well-being of its employees, including hiring a behavioral psychologist and staff clinicians.

“It’s a whole new world for us,” Bastian said.

China said it would hit back at nations that placed COVID-19 restrictions on its travelers for “political goals,” showing the coronavirus remains a politically sensitive subject in Beijing even as it lets the virus run...Read More

China may be reopening, allowing its 1.4 billion people to come and go largely without restrictions, but just as it is, a slew of other countries are tightening measures for travelers from the world’s second-biggest ...Read More

The jet era that globalized air travel for half a century was brought to an abrupt halt with COVID. Now, planes are back in the skies, but flying’s proliferation is in reverse: Fewer aircraft are plying a smaller network...Read More

With a 14-day quarantine required for travelers entering Hong Kong, Chow skipped her usual flights across the Pacific, making do ...Read More