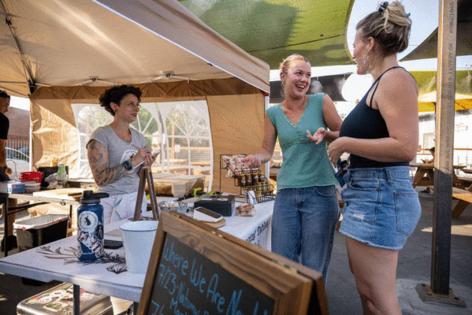 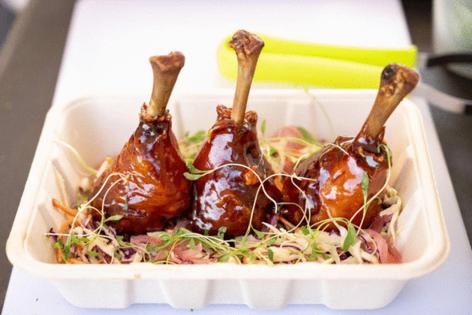 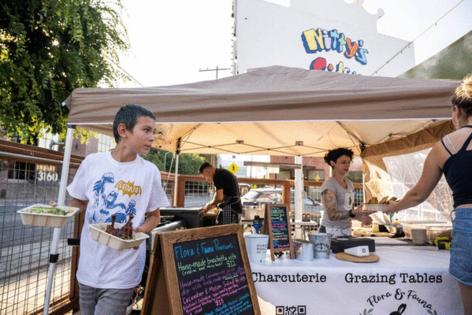 “Every time we would go to trivia, it would either be tacos, pizza or some kind of over-the-top fried crazy food that would just make you feel sick to your stomach after,“ said Feldman. “It was good at the time, but not so good after. “

Feldman, 30, and Lee, 35, met in May 2020 and soon after started selling pasta, crackers and dried pastas at farmers markets. Their business called Flora & Fauna Provisions — think plants and animals in a broad sense — evolved to include selling jams, beer nuts and mustard.

They received their catering license in March of this year, enabling them to cater private parties, weddings, graduations and other events.

On June 28, they held their first microbrewery pop-up restaurant event. Two months later, they have become regulars at a rotating set of microbreweries.

At a recent pop-up dinner at Nitty’s Cider in Sacramento, Feldman and Lee brought their pots and pans, a portable grill and a fryer, running their whole kitchen under a small tent.

The demand was strong for the menu items. They included house-cured pork-belly sliders with bacon, fried eggs aioli, farmers market tomatoes and butter lettuce on a brioche bun, a cucumber melon salad with feta cheese and bratwurst on a pretzel bun with a choice of housemade toppings.

“We had everything on the menu because it all sounded so amazing and we were really hungry,” said Katrina Lund, a social worker, who dined with her sister and two friends at the pop-up restaurant.” And I think collectively our favorite was the sliders. They were simple in the best way. Every ingredient on the sliders had so much flavor.”

Others eating at the pop-up restaurants were fans of the sausage sandwich.

And probably for good reason. Lee’s day job is as a sausage maker at V. Miller meats, a Sacramento butcher shop.

A point of passion for Feldman is that all the local vegetables served are from local Sacramento area farms, adding to the freshness of the dishes.

She said while Sacramento has been dubbed the farm-to-fork capital of the U.S., the farmers are still in the background.

“Everyone celebrates all these chefs,” she said, “but no one is celebrating the farmer. We wouldn’t have food without the farmer.”

When customers compliment Feldman and Lee about the food at the Nitty’s Cider event, the couple were quick to speak about the local farms contributing to the food experience.

Feldman said she will soon be adding a shout-out board listing the farmers at future events.

Where you will find them

On any given week, the Flora and Fauna Provisions pop-up goes to several different microbreweries.

On Labor Day weekend, the traveling restaurant will be making three Sacramento appearances.

Feldman, like Lee, works a day job, but hers is not in the food industry. She works as an inpatient aide at Sutter Medical Center.

Feldman said she doesn’t mind the two jobs, and she loves providing patient care, but food is her passion.

She said she fell in love with food as a little girl, watching the food network more than cartoons.

A career in food

Her first job was working at a doughnut shop and deli, and by the time she was 16, she was employed at Nugget Markets, the Sacramento area supermarket chain. By 18, she was working at the market’s specialty cheese department as a cheesemonger.

Her training included visiting dairies and cheese makers, to become an expert in cheese and charcuterie.

Feldman left the food industry in 2017, only to fall in love again with her original passion, when she met Lee in 2020.

Food has been a major love for Lee too.

He started in the culinary world at age 20. He attended the Le Cordon Bleu cooking school in Natomas and did an externship for several months in Northern Spain. His Spain experience included working as a line cook in a rural restaurant.

While the pair’s immediate goal is to grow their pop-up restaurant business, Feldman and Lee do have a long-term vision.

They want to open, like many chefs, their own brick and mortar restaurant, finding a permanent home for their food.

“Food is a love language all its own,” Lee said, “and once you have fallen in love with food, there is no going back.”

Carrot scraps, watermelon rinds, coffee grounds, bitter fruit pith and everything else you've most likely thrown into your garbage are on the menu at Slow Burn, though you'd never recognize them as such. Fermented, ...Read More

Whether or not you are a travel obsessive, you know what one sounds like.

This is someone who'll eagerly tell you which mileage-reward program to choose, when renovations will be done at LAX, where to sleep in San Diego, ...Read More

Travel by air skyrocketed toward pre-COVID levels ahead of Thanksgiving — and even exceeded 2019′s numbers some days.

Thanksgiving week has always been the busiest travel season of the year, and experts expect the number of people flying and hitting the road will be close to what it was before the pandemic.