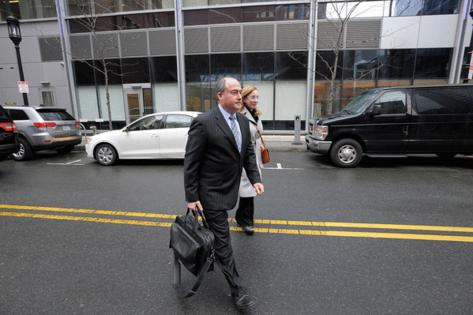 BOSTON — “Varsity Blues” moms and dads are back to their jet-setting ways hobnobbing in Fiji, Ireland, England, Scotland, Turkey and Germany.

But one college admissions cheater on home confinement isn’t so lucky.

San Diego television executive Elisabeth Kimmel, under house arrest for a year for scamming her kids into Georgetown University and the University of Southern California, was denied a request to attend a graduation at the University of Illinois and do business while there.

U.S. Attorney for Massachusetts Rachael Rollins called the appeal wrong in so many ways.

“It would be a perverse result to allow the defendant to be released from custody to attend and celebrate the higher-education accomplishments of her children,” Rollins wrote, “even though her fraud, bribery and lies … are why she is serving a federal sentence as a convicted criminal in the first place.”

Kimmel claimed the “cardiac injury” she reportedly suffered after being served a warrant by the FBI as the college scam prosecution went nationwide left her “risking her life” if brought to trial. She even once came to the federal courthouse in Boston’s Seaport in a wheelchair.

She now must sit tight in her “8,000-square-foot penthouse condominium,” the feds said.

California booze magnate Marci Palatella, however, was allowed to travel to Bardstown, Kentucky, during her “home detention” last week and again in July, court records state.

She was convicted of mail fraud in the Boston-based “Varsity Blues” college scam case last year and co-owns a distillery in Kentucky with her husband, former San Francisco 49ers linebacker Lou Palatella. She was sentenced to six weeks in jail and six months of home confinement.

She was accused of paying $500,000 to land her son at USC as a fake football recruit.

She has agreed to submit to “location monitoring” while in bourbon country, records state.

Two high-powered dads, William “Bill” McGlashan Jr. and Homayoun Zadeh, are being allowed to leave the country while on probation after their college scam sentences were served.

McGlashan, once a top executive at a California private equity firm, has left on a whirlwind trip that will take him to Cork, Ireland, London, St. Andrews in Scotland and Fiji later in July, court records state. St. Andrews is a golf mecca.

He sent a thank-you note to Boston federal Judge Nathanial Gorton for letting him jet off and gave “a brief update” on “making a positive impact on the world” after his “terrible decision” in the college cheating scandal. That includes, the letter states, working with Prison Professors and founding OATH Life Systems — to help with water conservation and “regenerative agriculture.”

Zadeh, a noted periodontist, went to Istanbul, Turkey, earlier this month for a dental conference and also to Frankfurt, Germany, to oversee a clinical trial.

This is the latest in the “Varsity Blues” case that tallied 57 defendants — with the last one, Amin Khoury, being the only one found not guilty last week by a jury in Boston. Two other dads are appealing.

DETROIT — Forty-one countries away from hitting her goal of traveling to every country in the world by the age of 35 — and becoming the first Black woman to do it — Detroiter Jessica Nabongo was over it. Over the ...Read More

WASHINGTON — The Biden administration is lifting its requirement that all travelers test negative for coronavirus before flying to the U.S., amid pressure from airlines that viewed the measure as excessive and blamed it ...Read More

The Biden administration is lifting its requirement that international travelers test negative for coronavirus before flying to the U.S., amid pressure from airlines that viewed the measure as excessive and blamed it for ...Read More

International tourists are gradually returning to Florida and the rest of the United States, but some potential travelers aren’t booking vacations because of COVID testing requirements, inflation and gun violence, ...Read More