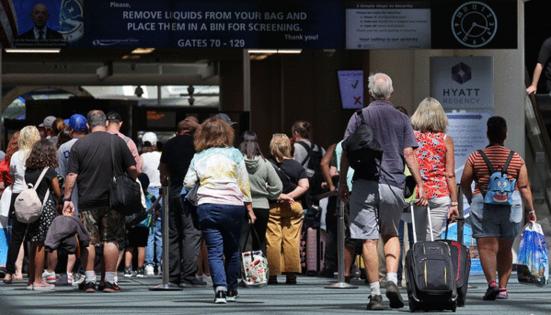 International tourists are gradually returning to Florida and the rest of the United States, but some potential travelers aren’t booking vacations because of COVID testing requirements, inflation and gun violence, experts at a travel trade show in Orlando said this week.

Addressing those concerns is a priority for officials, as the U.S. Travel Association estimates international travel to the U.S. won’t approach pre-pandemic levels until about 2024. A new National Travel and Tourism strategy aims to bring 90 million international visitors to the U.S. every year over the next five years.

One of the biggest things keeping visitors from the U.S. is also something analysts say could be easily resolved.

The travel association is urging the White House to repeal the requirement for vaccinated travelers to show proof of a negative COVID test before boarding a flight to the U.S., arguing that the economic impact of the requirement outweighs any health benefits.

A May survey commissioned by the association found nearly half of foreign travelers polled would be more likely to visit the U.S. if the requirement were lifted.

“Many foreign governments with similar infection, vaccination and hospitalization rates ... have already eliminated pre-departure testing requirements for vaccinated travelers,” a letter from the mayors read.

Roger Dow, the travel association’s president and CEO, said his organization met with the members of the White House Coronavirus Task Force last week to argue for the repeal, and they were receptive.

“They agree that logic was not there. They agreed the science, the data, does not support this issue,” he said at the IPW conference held in Orlando. “So it’s now been delivered to the White House, and we’re gonna just continue to pressure [them].”

Rising global inflation also is affecting travel plans with no clear end to higher prices in sight. But experts agree most people who want to come to the U.S. will still make the trip, though they will probably spend less.

Christopher Thompson, president and CEO of Brand USA and a former head of Visit Florida, said, “What they will do is probably change the way they’re going to travel.”

Alan Fyall, associate dean of academic affairs at the University of Central Florida’s Rosen College of Hospitality Management, said studies consistently show that people make vacations a priority, even if their budgets are tight.

“People will forgo their new car, they will forgo a new kitchen, but to give up their travel? That’s their last resort,” he said. “That has been a consistent trend for many, many, many years.”

Visitors will cut costs in certain aspects of their trips, like food and lodging, to still fulfill their larger travel plans, he said.

Travel industry leaders in the U.S., including Thompson and Dow, also acknowledged that potential visitors are worried about gun violence due to recent mass shootings in Buffalo, Texas and elsewhere.

Many foreign governments list gun violence as a safety concern for visitors to the U.S. in their travel advisories, including the U.K., Canada and Singapore.

“If we don’t do something about it, it’s going to hurt us,” Dow said.

But for the most part, officials at IPW declined to say if the travel sector would actively lobby for gun law changes, deferring to President Joe Biden’s remarks on the need for legislative change.

Though gun violence is something international travelers keep in mind when visiting the U.S., it generally has not discouraged tourism in the past, said Fyall, who is also the Visit Orlando Endowed Chair for Tourism Marketing at Rosen.

“It’s primarily because when these incidents happen, tourists aren’t the target, or tourists 99 times out of 100 are not impacted,” he said. “Sadly, it’s almost, ‘you’re safer coming as a tourist than you are living here.’”

Compared to many U.S. destinations, the latest numbers suggest Orlando and Florida are on a faster track to recovering global visitors.

A study by Tourism Economics estimates that Orlando will reach 72% of its pre-pandemic international arrivals in 2022, surpassing the U.S. forecast of 58%, Matej said in a statement.

“The forecast is based on our strong performance thus far and the fact that we are such a popular vacation destination for international travelers,” Matej said.

Data from the travel marketing firm Sojern, which works with Visit Orlando, shows bookings for international flights to the city and the U.S. overall are above 2021 levels. Flight bookings for both surpassed pre-pandemic levels of 2019 in February and have remained above them since.

Florida was the top destination for international travelers in April, comprising 32.5% of total searches, Sojern found. Travelers from Puerto Rico, Colombia and Brazil show the highest interest in visiting the state.

Even so, Stephanie Dunford, Sojern’s sales director for destinations and attractions, said people ready to travel are booking at high levels, but people are still searching for flights to the U.S. less often than they were in prior years, indicating some hesitancy.

She is seeing uncertainty about COVID restrictions affect prospective travelers’ plans in addition to the issues officials named.

“Something we’ve been telling our marketers that we work with is, ‘make it known to your international travelers what they can expect when they arrive,’” Dunford said.

Fyall predicted pre-pandemic international travel levels could return to Florida sooner than to the rest of the U.S. because the state has such a loyal following in international markets.

Still, Orlando likely will not recover its full international travel levels until next summer, he said.

“The pent-up demand to travel, generally, is huge,” Fyall said. “People want to travel; it’s just difficult at the moment.”

People across the U.S. are expected to fly in the highest numbers since the start of the COVID-19 pandemic for the July 4 holiday weekend, stressing a beleaguered transportation system experiencing tens of thousands of ...Read More

Despite soaring gas prices and the threat of delayed or canceled flights, experts are predicting travelers will be out this holiday weekend at levels not seen since before the pandemic, and in some cases, at record highs. ...Read More