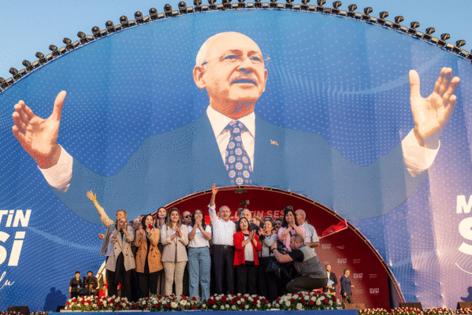 Turkey’s foreign relations ministry summoned Ambassador Jeff Flake after the U.S. Embassy posted a warning that police might respond violently to an opposition rally in Istanbul.

“The Turkish National Police have used measures, including water cannons, tear gas, and non-lethal projectiles, to control crowds at protests in the past,” the embassy said in an alert on its website before Saturday’s event. “There is a strong possibility similar measures will be employed at this demonstration.”

The embassy warned Americans to avoid demonstrations and protests in Turkey “as they can be unpredictable and at times become violent.”

The ministry told Flake, a former Republican senator from Arizona, that the warning contained unfounded allegations about actions taken in the past.

Flake was also told at length that disproportionate force by police against demonstrators has been an issue in the US, according to state-run Anadolu agency.

“It is unacceptable to create the impression that there is an important problem in this regard in Turkey,” the ministry said.

Turkey’s opposition Republican People’s Party’s (CHP) leader Kemal Kilicdaroglu spoke Saturday at the rally the U.S. Embassy had warned about. Despite the U.S. warning, no incidents were reported at the large gathering in Maltepe, a district of Istanbul.

Kilicdaroglu called on all religious, ethnic and political groups to join the opposition against Erdogan, Turkey’s longtime leader.

The “Voice of the People” rally was moved to Istanbul after the nation’s highest appeals court this month sentenced Canan Kaftancioglu, a leading CHP official, to nearly five years in prison for allegedly insulting Erdogan and the state.

CHP has been in talks with five other opposition parties on the common goal of defeating Erdogan and bringing back the parliamentary system in Turkey.

Kilicdaroglu, who seems to be the most popular candidate to run in elections scheduled to be held in June 2023, hasn’t announced his candidacy but dropped some hints on Saturday.

“I will not change when we are in power,” said Kilicdaroglu. “I promise to bring back what was stolen from this country.”