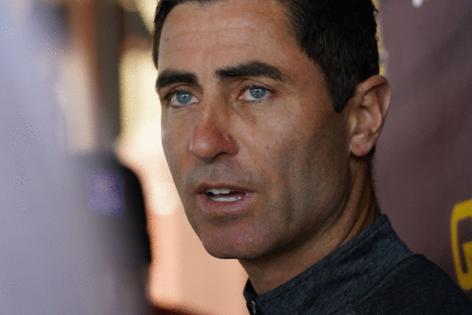 SAN DIEGO — San Diego's MLB team has dumped Robinson Cano, who had three hits in 33 at-bats during his senior moment wearing the brown.

I'm beside myself, which isn't possible in a small space. How could the Pads release one of their best hitters?

After all, Cannot batted .091, 52 points above his age, only about .140 below the team average. Not bad, considering these guys swing like 95-year-old playboys.

OK, so we're joking around. It's baseball. Besides with great pain, how else can we look at Padres bats, the opposite of corked, among the worst in the game?

Forget the occasional offensive spurts, even against the stuff of a Corbin Burnes. Baseball runs 26 miles, 285 yards.

Bringing in the 39-year-old Cano was an act of desperation by general manager A.J. Preller. Nothing to lose, though. He was playing for the minimum ($700,000), is a good clubhouse guy, and perhaps he could have helped youngsters with his batting expertise.

But Cano didn't have a chance — and wasn't allowed to have one.

Luke Voit, after so many futile swings creating more bad wind than flatulent Mongo, at least has come around.

But the Padres' offense is boring, moves like a river horse, and dull doesn't cut it.

So, without Zola Budd to blame, who's at fault?

Memorial Day was always a fun holiday at my house. As a kid, I remember the day to be sunny and not too cold. I’m sure that was not the case every year, but my memory holds that weather report on record anyway. One of ...Read More

The Skinny on Sugar Part 2

In our last installment, I talked about how there are a lot of myths and misinformation still floating around that relate to how we get sick and whether it has anything to do with sugar. ...Read More