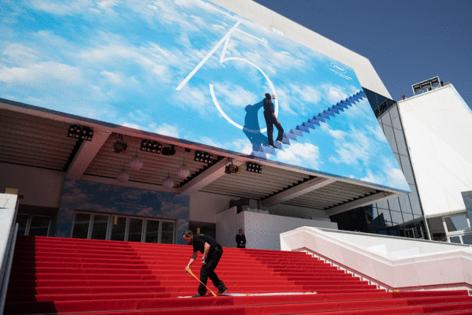 CANNES, France — The image gracing this year's 75th anniversary Cannes Film Festival poster comes from "The Truman Show," specifically that climactic moment when Jim Carrey's Truman climbs a staircase against a domed wall painted to look like a cloudy blue sky. This is the outer edge of a carefully constructed set that has been his lifelong home and prison. It's also a grand illusion, a reminder of how movies and TV shows construct a deeply transporting simulacrum of reality. And because this is Cannes, that stairway to heaven also evokes the famous red-carpeted steps leading up to the Palais des Festivals, the longtime headquarters of the grandest cinematic showcase in the world.

I haven't exhausted my metaphors yet. Returning to Cannes for the first time in three years thanks to the pandemic, I confess I find myself feeling a bit like Truman, stretching out my hand as though I don't quite trust what my eyes are telling me, and feeling both excited and nervous about taking my first few steps out of the bubble. That's an exaggeration, of course.

For starters, this trip hardly counts as my first attempted return to some state of normalcy (and Cannes, a bubble to end all bubbles, is no one's definition of normalcy to begin with). There's also the fact that, after canceling its 2020 event, Cannes bounced back last year with a resurgent program that featured the premieres of "Annette," "Drive My Car," "The French Dispatch," "Red Rocket" and "The Worst Person in the World," among others.

That particular edition of Cannes, the first of the COVID-19 era, unfolded (I'm told) under a weird cloud of excitement, anxiety and cautious optimism. Attendees wore masks during screenings and carved out time in their busy schedules to get regular PCR tests. This year's edition, for better or worse, is moving full steam ahead. Most of last year's safety protocols have been relaxed (prematurely, I suspect), though some of us have come as prepared as possible, with masks and rapid-test kits in our suitcases and a second vaccine booster dose running through our veins.

Maybe we should have stayed away, leaving the festivities to the truly festive-minded. But how could we? One year without a Cannes was bad enough, and two was far worse; three would have been unimaginable. And this is Cannes' 75th birthday, an occasion for which the festival's longtime director, Thierry Fremaux, and his selection committee have pulled together a characteristically wide-ranging program.

As ever, their decisions advance an argument for the irrepressible vitality of cinema as a great, enduring public pastime — a reason, even in these eras of global pestilence and streaming-platform domination, for movie lovers from all over the world to come together, screen together and, yes, breathe the same air together.

Their points of convergence at this year's festival will include a presumptive blockbuster, "Top Gun: Maverick," the Tom Cruise-starring action sequel that was delayed for two years due to the pandemic; it makes its world premiere Wednesday at Cannes and opens May 27 in theaters worldwide. Some will doubtless be eager for a first look at Baz Luhrmann's "Elvis," a musician biopic whose mere combination of subject and filmmaker conjures precisely the vision of glitz, glamour and go-for-broke auteurism that is this festival's raison d'etre. (Still others might make time for — what else? — "The Truman Show," which will screen Tuesday night on the beach as part of the festival's annual Cinema de la Plage program.)

Event movies are often seen as the medium's last great hope, potential box office juggernauts in the making. But the art can't survive by Hollywood alone, and I'm especially curious about the movies that arrive here on less grandiose swells of advance hype, the ones from great filmmakers whose work I've loved in the past and hope to love again.

Here, in alphabetical order by title, is a not-even-close-to-comprehensive list of 12 movies I'm excited to see at the 75th Cannes Film Festival:

The apocalyptic title of James Gray's latest might initially put you in mind of a sequel to his previous feature, "Ad Astra." But after that cosmic science-fiction drama and the superb, equally weighty "The Lost City of Z," "Armageddon Time" sounds like something of a return to basics, or at least familiar territory: Starring Anne Hathaway, Anthony Hopkins and Jeremy Strong, it's a semi-autobiographical coming-of-age drama inspired by Gray's '70s Queens, New York, upbringing. Gray, by the way, is one of a few Cannes veterans this year chasing their first Palme d'Or, the festival's top prize. (The others include Arnaud Desplechin, Park Chan-wook and David Cronenberg.)

And then there's Japanese master Hirokazu Kore-eda, who won the Palme in 2018 for his quietly heartbreaking drama "Shoplifters." His latest, "Broker," concerns the business of "baby boxes," spaces where parents can anonymously leave their infants to be cared for by others. The story is set in South Korea and features that country's most acclaimed actor, Song Kang-ho (star of the Palme-winning "Parasite"); if that sounds like a departure, its subject matter — abandoned children, unconventional families — feels like thematic home turf for the director of "Like Father, Like Son" and "Nobody Knows."

Nobody does fractious French family dramas quite like Arnaud Desplechin, and the narrative thrust of this one — a brother and sister who've been estranged for years, only to find themselves brought together by tragedy — reminds me of a key subplot from his 2008 triumph, "A Christmas Tale." That would excite me enough even if the movie didn't boast two leads as redoubtable as Marion Cotillard and Melvil Poupaud.

It's hard to believe that it's been eight years since David Cronenberg's last movie, "Maps to the Stars," screened at Cannes in 2014. His latest, the much-hyped "Crimes of the Future," stars frequent collaborator Viggo Mortensen, plus Léa Seydoux and Kristen Stewart, in a surgery-centric story that would seem to push even Cronenberg's peerless reputation as a body-horror specialist to macabre new extremes. After last year's Palme d'Or victory for the grisly vehicular thriller "Titane" — a movie clearly and knowingly inspired by "Crash," Cronenberg's 1996 Cannes controversy-stirring classic — it'll be fascinating to see what this year's Vincent Lindon-led competition jury makes of the genuine article.

I've gone up and down with South Korean director Park Chan-wook over the years and have no particular love for the violent shocks on display in his previous Cannes prize-winners, "Oldboy" and "Thirst." But 2016's twisty, teasing "The Handmaiden" made me a believer again, and this latest competition entry, a murder mystery set in a remote mountainscape, sounds tantalizing indeed.

The promise of a meaty lead role for the great Emily Watson bodes well for this moral drama set in an Irish fishing village. Also that it's the latest work from Anna Rose Holmer (co-directing here with editor Saela Davis), whose 2015 drama, "The Fits," is one of the most arresting debut features in recent memory. The film is screening in Directors' Fortnight, an independently curated section that runs parallel to the festival's main program.

Mia Hansen-Løve ("Eden," "Things to Come") didn't wow everyone at Cannes last year with her film-within-a-film meta-travelogue "Bergman Island," though this critic was more than sufficiently charmed. I know next to nothing about her latest, except that it features a few French actors I've mentioned already (Seydoux, Poupaud) and is playing in Directors' Fortnight. Since that's where Hansen-Løve first made waves with her wonderful debut feature, "All Is Forgiven," I'm seeing that as an auspicious sign.

Cristian Mungiu won the Palme in 2007 for his searing drama "4 Months, 3 Weeks and 2 Days" and also won prizes for his next two features, "Beyond the Hills" and "Graduation." Whether or not that streak continues with his new competition entry, "R.M.N.," he remains one of the foremost practitioners of new Romanian cinema, and his latest sounds like another rigorously unnerving moral tale that illuminates the inner darkness of an entire community. It's co-produced by the great Belgian brothers Jean-Pierre and Luc Dardenne, who, as it happens, are competing this year for their third Palme d'Or (!) with "Tori and Lokita."

Italian director Pietro Marcello made one of my favorite movies of recent years with his gorgeous and inventive Jack London adaptation, "Martin Eden." His latest is another exercise in cross-cultural inspiration, a free adaptation of the novella "Scarlet Sails," by Russian author Aleksandr Grin, that takes place in northern France between the two world wars. It stars Juliette Jouan, Raphaël Thierry, Louis Garrel and Noémie Lvovsky, and it's the opening film of Directors' Fortnight.

I confess that I look forward to just about every new cinematic wackadoodle from Quentin Dupieux, the pranksterish mastermind behind "Rubber," "Deerskin" and "Mandibles." Not much has been disclosed about the content of his latest, which is playing in the festival's midnight section, but the title's enough for me.

Claire Denis ("Beau Travail," "35 Shots of Rum") has been one of the world's great filmmakers for decades, which is why it's bewildering that she hasn't competed at Cannes since her great 1988 debut, "Chocolat." But she finally cracked the competition a second time with this romantic thriller adapted from a Denis Johnson novel; it stars Joe Alwyn and Margaret Qualley and unfolds against the tumultuous backdrop of the 1984 Nicaraguan revolution. It's Denis' second new movie of 2022 after "Both Sides of the Blade," which won the directing prize at this year's Berlin International Film Festival. (Coincidentally, that movie stars Vincent Lindon, who happens to be the president of this year's Cannes competition jury. Hmm … )

The Pine Ridge Reservation, stretches of which were seen in Chloé Zhao's independent dramas "Songs My Brothers Taught Me" and "The Rider," is the setting for this fact-inspired story of friendship, family and loss, directed by Riley Keough (the actor known for her roles in "American Honey" and "Zola") and Gina Gammell. It's premiering in Un Certain Regard, a strand of the festival's official selection devoted to new and emerging voices, some of whom invariably figure among the festival's most exciting discoveries.

When I was just a tween there was another war going on. That one was the Vietnam War.

My brother-in-law was in the navy. He was stationed on the aircraft carrier named after John F. Kennedy; our ...Read More

We were all taught the same thing. Calories in. Calories out. It’s all about the calories.

When I was a young teenager, I bought one of those pocket-sized calorie ...Read More

As a youngster, I attended a Catholic grade school.  In those days we gathered for morning Mass every day.  When I was in second grade I was allowed to receive ...Read More