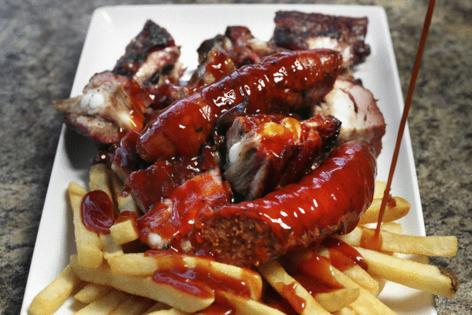 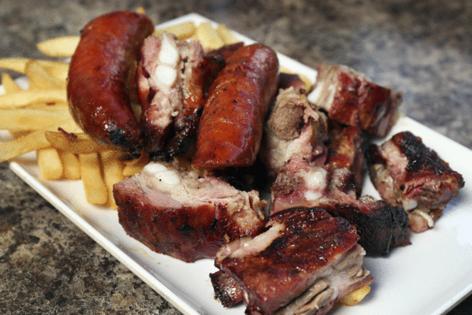 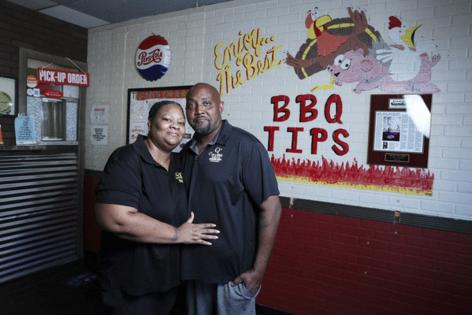 CHICAGO — When picking my first Chicago apartment in 2008, barbecue may have swayed my decision. Although my Bucktown walk-up had excessively creaky floors and windows so old the air whipped right in, it was also two blocks from Honey 1 BBQ.

There I could watch owner Robert Adams Sr. cook all the meat in a fascinating glass-sided smoker, often called an aquarium smoker. The contraption had no dials, switches or temperature gauges. If the heat needed to be higher, Adams added more wood. To cool it down, he sprayed the inside with water.

“I came from the South, and we didn’t have gas when we were coming up,” Adams said of growing up in Arkansas. “I’m keeping it all original. My mom cooked on a wood stove. I cook with my 10-foot pit the same way.”

While customers could order pulled pork or a rack of ribs, most people went with the rib tips, small smoky pieces of pork riddled with bones and cartilage. If you didn’t mind some dexterous eating, you could unlock some of the juiciest and most flavorful nuggets of smoked pork imaginable. These were paired with hot links — spicy, coarse-ground sausages — a handful of fries and a few slices of white bread. A bright red barbecue sauce could be either ordered on the side or liberally poured on top.

This, I would find out, is Chicago-style barbecue, which developed during the mid-20th century predominantly on the West and South sides.

As Black Americans migrated from the Southern United States, they brought with them their barbecue prowess, but also had to adapt to cooking in a large and often cold city. Because there wasn’t room for traditional barbecue pits, they quickly switched over to the distinctive aquarium smokers that could be housed indoors. With Chicago’s enormous meatpacking industry nearby, a number of entrepreneurs learned how to transform one of the cheapest cuts, rib tips, and turn them into a true delicacy.

While still popular, this kind of barbecue is getting harder to find in the city it’s named for. Legends of the scene closed, some driven by the challenges of the pandemic, including the original Uncle John’s BBQ on 69th Street and Barbara Ann’s. Feeling unsupported on the North Side, Honey 1 BBQ moved to Bronzeville.

But barbecue in general is booming in Chicagoland, especially in the suburbs, where a host of phenomenal new shops have opened within the past few years. As I explained in a recent article, most of these places are white-owned and look to Central Texas for inspiration. The style favors brisket cooked in a large offset smoker with sauce always on the side (if there is any sauce at all).

While it’s exciting to see people so passionate about smoked meat entering the game, I wondered what would happen to the barbecue scene already in Chicago, which is mostly Black-owned. Will the regionality of barbecue disappear as Central Texas style becomes popular all over the country?

“What you are seeing in the Chicago suburbs is happening everywhere,” said Adrian Miller, an award-winning food writer. “Texas barbecue is even big in the Middle East. It’s just the ‘it’ barbecue right now.”

Miller, who recently published “Black Smoke,” an exhaustive history of how integral Black Americans were to the development of barbecue, has a couple of theories about why Texas barbecue has become so popular. “I think Texans are the best cheerleaders,” Miller said. “It was a genius move for Texas Monthly to declare a barbecue editor. I hope that other regional magazines will do something similar.”

He also notes pitmaster Aaron Franklin “caught lightning in a bottle” when he opened Franklin Barbecue in Austin, Texas, back in 2009. It’s now one of the most famous barbecue joints in the world and regularly has a multihour line. But Franklin did something unusual with the attention. “Instead of being super secretive, he said, ‘I’m just going to show people what I do,’” Miller said. “That was a very shrewd move. In general, people in Texas have been able to show others what they do, so now you can read about it or watch it on YouTube.”

Texas Monthly’s barbecue editor, Daniel Vaughn, said he’s also seeing Texas barbecue expand all over the country. In fact, he was heading to Oklahoma to try a couple of Texas-style barbecue joints when we spoke. “(Texas barbecue) has unquestioned barbecue dominance right now,” Vaughn said. “We do have the distinct advantage of having a whole state instead of being tied to a city, like Memphis or Kansas City.”

In general, Vaughn thinks the spread of Texas barbecue can be positive, especially if an area doesn’t have a strong barbecue history of its own. “For budding barbecue scenes, they need to look somewhere else for their inspiration,” Vaughn said. “I think it will eventually mature into a more recognizable style of their own. I don’t know how long that takes, but I hope that it will happen.”

That said, he’s a little surprised Chicago, which has a long barbecue history, would so readily embrace Texas barbecue. “It’s a little strange to me,” Vaughn said. “It would pain me to see people not embracing Lem’s Bar-B-Q or Honey 1 BBQ.”

Miller also worries the full embrace of Texas-style barbecue will have a negative impact on smaller regional styles. “What worries me is that it is crowding out barbecue styles to their detriment,” Miller said. “If customers expect Texas barbecue from a restaurant that is new to them, and instead they find rib tips and hot links, will they walk out?”

People have worried about the decline of Chicago’s Black-owned barbecue scene for years now. In 2018, Kevin Pang, former Chicago Tribune food writer and current editorial director of digital at America’s Test Kitchen, wrote an article for Saveur magazine questioning why the food wasn’t more popular all over the city. “I spent a decade as a food writer at the Chicago Tribune, and not a week goes by I don’t receive an email asking for the best deep-dish pizza or Italian beef in town,” Pang wrote in the article. “But no one asks about barbecue, and it’s my favorite of our city’s culinary contributions.”

When I talked to him recently, Pang explained that while he loves the style, he understands why it hasn’t yet caught on outside the area. “So many forces are conspiring against Chicago’s South Side barbecue, from the location to the economics,” Pang said. He explained that most operations lack seating, and you often have to order through bulletproof glass. But he also noted it’s very complicated. “Whenever we journalists do these types of stories, we often try to pinpoint one or two reasons,” Pang said. “But it’s really a dozen reasons that make it hard for this underdog cuisine to succeed.”

For this style to really take off, Pang thinks there needs to be a local catalyst, like how Rodney Scott managed to go from running a family barbecue joint in South Carolina to opening multiple locations of Rodney Scott’s BBQ in the South.

There are certainly worthy contenders to take up that mantle, should they care to, and most are familiar, beloved names to generations of Chicagoans. While there haven’t been many new Chicago-style barbecue joints, the classics are holding on, including Lems Bar-B-Q, Leons BBQ and Uncle J’s B.B.Q.

A few owners said business has actually improved. After leaving Bucktown, Honey 1 BBQ found an enthusiastic home in Bronzeville, and the support continued even during the past two years. “I did fine during the pandemic,” Adams said. “It’s been a little slow since Labor Day, but other than that we are good.”

James Trice, the owner of Trice’s Original Slab BBQ in South Shore, said the same is true for his business. “We’re doing good,” Trice said. “Even during the pandemic, we stayed busy.”

Some places have had to adapt. Quincy Jones (no relation to the musician) of Q’s Tips & Wings BBQ said he had to cut down on staff during the pandemic, but things are starting to look up.

“We had to make some changes, but we went with what worked for us, and it’s getting much better,” Jones said. The hardest part has been dealing with the increasing food costs, because a lot of his customers are price sensitive. “We have customers who will complain if we change the price by 10 cents,” Jones said.

While the shop offers Chicago classics like rib tips, Jones isn’t ignoring other kinds of barbecue. “I went to Texas,” Jones said. “I went to Franklin Barbecue in Austin and waited in that long line. That brisket was something else. I also really liked Gatlin’s Barbecue (in Houston).” Instead of an aquarium smoker, he’s using an insulated smoker from Lone Star Grillz, which is made in Texas.

Q’s also serves turkey rib tips, which have been growing in popularity around the South Side. Though much leaner than pork rib tips, Jones believes he has the method for ensuring the meat always comes out right.

A couple of owners hope that by addressing the lack of seating, they can attract more business. “I’m looking for a bigger place,” Adams said. “I’d like to get something with seating, so I could get the clientele I’d like to have. Plus, barbecue that you can sit down and eat immediately tastes better than when you get it to go.”

He and his son, Robert Adams Jr., have been scouting around Bronzeville, but haven’t yet located the right space. “I just can’t find the spot,” Adams said. “There are lots of vacant lots, but they aren’t available.”

James Trice said he’s getting ready to break ground on a new location for Trice’s Original Slab BBQ that will have sit-down dining, along with wine and beer. “We have all the permits from City Hall,” Trice said. “We’re ready to go.”

He thinks the new location will attract new people to the restaurant and hopefully help spur investment in the area. “We have a vested interest in helping restore the 71st Street corridor because it has been stuck in one space for a long time,” Trice said. “But people love what we are doing and keep coming back.”