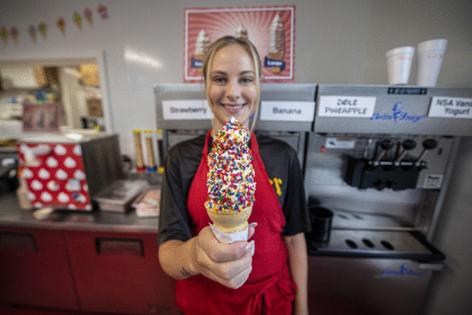 PHILADELPHIA — Philly empties out on summer weekends, when the Shore crowd beats a path down the Expressway. Streets are quiet, parking spots abound, and the city’s businesses brace themselves for the slow season.

That made the line outside Small Oven Pastry Shop’s walk-up window on a recent Sunday afternoon — in 100-degree heat — all the more surprising. They had come for the soft serve.

“Between cold brew and ice cream, this weekend was crazy,” said Small Oven owner Chad Durkin. He’s been whipping up seasonally flavored soft serve in-house every weekend since Memorial Day, which kicked off with strawberry-rhubarb and malted vanilla bean. Durkin launched the warm-weather project last summer and has been refining recipes since.

Late last month, the Point Breeze porchetteria/bakery sold out of 72 quarts of sweet corn and blackberry soft serve over a single Saturday. Customers were clamoring for more, so Durkin made a 22-quart batch of Madagascar vanilla overnight, to be topped with hunks of corn bread and blackberry compote. It was gone by 4 p.m. Sunday.

Small Oven’s scratch-made soft serve is rare, and the array of flavors it will offer over the course of the season — from lychee and lemongrass to butterscotch and apple pie — is fairly unique, too. While hand-dipped hard ice cream often comes chock-full of batter swirls and cookie crumbles, its lighter cousin has to stay airy and smooth, meaning soft serve is usually found in just chocolate, vanilla, and twist.

But elsewhere in Philly, the suburbs, and South Jersey, ice cream shops and restaurants are infusing soft serve base with increasingly imaginative flavors: brown sugar, sweet cream, German chocolate, hazelnut, graham cracker, blueberry, chocolate-tahini, ube, and even avocado. The Inquirer went on a quest to find the many stripes of soft serve and learn how they’re made.

What is soft serve, anyway?

At Laser Wolf in Kensington, staff cooks up a batch of brown sugar soft-serve base every couple days. “Milk, milk powder, heavy cream, granulated sugar, brown sugar,” said chef Andrew Henshaw, rattling off the recipe. They’re rounded out by two more esoteric ingredients that give it its trademark texture: Xanthan gum thickens and stabilizes the mix, preventing it from getting icy; trimoline, a sugar syrup, keeps it nice and smooth.

Soft serve may taste rich, but it’s actually lower in fat than hard ice cream, which usually hovers between 14% to 17% butterfat. Soft serve’s rarely rises above 10% — and that’s key to dispensing the silky treat into cups and cones. (Soft-serve machines typically have room for two flavors, plus a twist.)

A soft-serve cabinet constantly chills and mixes a liquid base to maintain its consistency. If you were to put a higher-fat base in the machine, “it would churn. The butter would come out of solution. You’d get greasiness or actually butter flecks,” said Ryan Fitzgerald, owner of Fishtown’s 1-900-ICE-CREAM.

While 1-900′s brand is best known for its nostalgia-driven hard ice cream, Fitzgerald launched soft serve last year after he acquired a scoop shop in downtown Ardmore. Since then, he’s been concocting new flavors on a weekly basis, mixing purees, juice, nut butters, cookies, and more into a soft-serve base from an undisclosed Lancaster dairy. Recent entries include Concord grape and salted peanut butter, roasted Sicilian pistachio and strawberry Nesquik, and Cinnamon Toast Crunch and banana. Toppings, dips, and flavor injections ratchet up the experience.

The soft-serve envelope is being pushed elsewhere in the area. At Càphê Roasters in Kensington, owner Thu Pham and chef Jacob Trinh have been rotating experimental flavors in and out to complement their condensed milk soft-serve, a mainstay at the Vietnamese cafe. A swirl of tropical pandan-coconut soft serve tops lychee black tea in the cafe’s latest float, but past flavors have included mocha, avocado, and honey-butter — inspired by a popular Korean potato chip flavor.

“It’s a process of learning every single time we try something new,” Pham said. “We’ll try some things and clog up the machine, and then we’ll just adjust the ratio of certain ingredients.”

At Levittown’s Dairy Delite on Old Bristol Pike, owner Dave Scott previously featured a vibrant purple “mystery flavor” of soft serve, the flavoring of which he kept secret even from his workers. The flavor became so popular Scott had to change his method (and eventually reveal the secret). He had been making his own ube puree, roasting and blending purple yams, then mixing them into soft-serve base.

“It’s a lot of work for one guy, so I ended up buying extract,” he said. Scott still makes the purees for other soft-serve flavors, including blueberry, banana, apple, and pumpkin. It has its disadvantages.

“Sometimes [the flavor’s] not consistent. I’ll hear things like, ‘Last week it had...’ and I’m like, ‘Well, some bananas have more sugar content than others.’ It’s part of being homemade.”

There are simpler ways to flavor soft serve. Jen Wheeler of Levittown’s other Dairy Delite, on Woodbourne Road, whisks commercial strawberry puree from Northeast Philly’s I. Rice & Co. into four quarts of Crowley vanilla ice cream mix. It comes together in seconds. All that’s left is to pour it into the machine — the other factor that often limits soft-serve choices.

“We’ll rotate flavors, otherwise we’d need seven or eight machines,” said owner Dave Wheeler. He has four soft-serve machines, with room for eight flavors. Chocolate and vanilla are staples, of course, so the other cabinets get filled with a variety of alternatives: banana, orange or raspberry sherbet, no-sugar-added vanilla, pineapple Dole Whip (a vegan soft serve), graham cracker, and more. Some flavors, like pumpkin, are seasonal. Others, he’ll swap into the rotation when he gets customer calls: “Where’s peanut butter?” or “When you gettin’ lime?”

For some business owners, eight flavors just isn’t enough. They can turn to the 24-flavor system, a setup that uses syrups, a mixer, and an extruder to infuse basic soft serve with a whole spectrum of flavors, from bubblegum to guava. That’s how Primo Water Ice in Westmont does it. The collection of syrups there, stored in plastic pump bottles, look like paints for an art project. You can tell which flavors are popular by how stained they are: Cotton candy, black cherry, and espresso lead the way.

The 24-flavor system has some drawbacks, explained Primo owner Adriana Adams, who also runs a Mister Softee distributor in Runnemede. It takes about two minutes from start to finish — pulling vanilla soft serve, adding flavor, blending it, pulling it again — which means the soft serve gets even softer. The mixer has to be cleaned between every use. On a busy night at an ice-cream shop, it can create backup.

”Sometimes you’ll have a whole family order all different flavors,” Adams said. Even more daunting is a gelati with flavored soft serve: “You have to pre-mix [the soft serve], squirt it out into the cup, then go get the water ice, come back to this machine, squirt again — hope that nobody else needs it in the meantime. It could take little bit, especially with the newbies.”

That doesn’t deter Joe Mosco, co-owner of Hilltop Creamery in Blackwood, which bills itself as “the King of Flavors.” Hilltop offers so many flavors, Mosco needs to get a new sign made to fit them all.

“We have over 40 flavors, maybe even more,” he said. “I lose track, because every flavor that comes out, I just buy it. We just got peanut butter and jelly a couple days ago, and jalapeño, believe it or not.”

Mosco concedes the 24-flavor system is a little outdated. “They got a new machine out that does 12 flavors that people might carry — I want to buy it, but I’m waiting for this machine to break. I heard it’s awesome.”

Soft serve is a feeling

That high-tech machine, the ElectroFreeze Fuzionate, can dispense different flavors of soft-serve at the touch of a button. You can find it at six of seven Richman’s Ice Cream shops in the region. (The Glenside store can’t fit one.) Like any soft-serve flavoring method, the Fuzionate has its pitfalls, but many perks, too.

“We’re able to actually flavor the ice cream at the point of contact when it comes out the spout, but it has to come out slower for that to happen,” said Richman’s co-owner Steve Matthews. “It’s probably three or four times the time to make a cone than it is for just a machine that’s coming out plain vanilla or chocolate.” That difference in time might mean longer lines, but it also means colder soft serve and a richer flavor.

People don’t seem to mind the wait. Richman’s sells more soft serve, volume-wise, than it does hard ice cream over a year — but it’s all dependent on what the weather’s like, Matthews said.

“When it is 60 degrees or colder, it’s all hand-dipped,” he said. “It’s only when it hits above 70 to 80 degrees does it become about 80% soft serve … when it hits 85 degrees or more, all the ice-cream sales go down, because dairy doesn’t quench people’s thirst.”

The equation may be different closer to the beach.

“Soft serve, it’s kind of your bread and butter,” said Jason Plum, co-owner of Custard Hut in Somers Point and Ocean View, New Jersey. “It’s part of the mystique of coming to the Shore. Like, let’s go get some soft serve and walk the boards.”

“There are not many jobs that people come for your service and they’re smiling,” he said. “It’s not something that we take for granted, as ice-cream shop owners, that people actually come up with a smile, and our job is to make that smile grow bigger.”