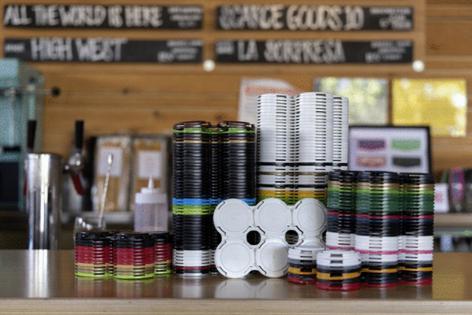 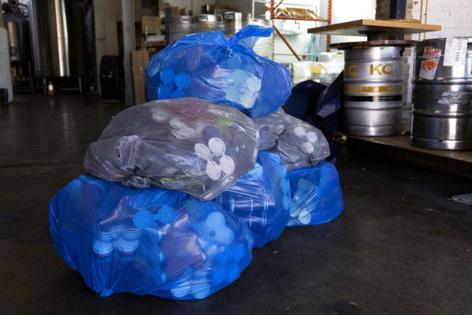 CHICAGO — You know those hard plastic beer can holders?

I have 147 of them. I counted. They’re an array of colors — black, brown, silver, red, purple, yellow, pink, blue, three shades of green — and in mostly four-pack sizes, but also as six-packs.

Why do I have a rainbow collection of 147 plastic beer top holders? Churning through a fair amount of beer is one reason, but another is that I haven’t wanted to toss them in the garbage, for obvious reasons, or in recycling bins for less obvious reasons: Even when tossed in with milk jugs, newspapers and aluminum cans, they rarely wind up recycled.

So they’ve stacked up over the years on the back porch, no actual plan in place. I’ve just been waiting for a solution.

The solution has arrived. And I even got a free beer for my troubles.

Alex Parker gets most of the credit. Parker, a former Chicago Tribune editor who works in communications for Molson Coors, helped launch Craft For Climate, his personal effort to help stave off climate change.

The effort is rooted in Parker attending a Climate Reality Project seminar in 2019, where a simple question was posed: “What is the highest lever you can pull to educate people about climate change?” Beer came to mind. Even before joining his current employer — not involved in the effort, but supportive, Parker said — he was a beer lover. The intersection of beer and climate seemed a natural place to start.

“I always thought other people with more power were taking care of it and seems that wasn’t the case,” said Parker, 42. “I felt I needed to do something. l didn’t know what.”

In October 2021, he launched Craft For Climate, which had a mission, but no real plan. Parker considered staging a craft beer festival with a climate education thrust, but wasn’t sure that would result in meaningful change.

Then he learned of Ecofriendly Beer Drinker, a New England operation that recycles plastic beer tops in Massachusetts, Rhode Island and Vermont. The program estimates 88% of plastic tops put in recycling bins never wind up recycled.

The program “seemed replicable in Chicago,” Parker said. “And something people should be doing.”

The plastic tops, manufactured from high-density polyethylene by Oregon-based PakTech, have become a popular means for packaging craft beer in recent years. Though the plastic is recyclable and used in an array of other products, the vast majority wind up not recycled. Many are thrown away and even those put in recycling bins wind up in landfills by slipping through the recycling sorting machines or else being contaminated by other recyclables, such as glass. Chicago has a particularly abysmal recycling rate, stuck at less than 10%, the city said last year.

“When consumers think they’re doing the right thing, they may be inadvertently contributing to the problem,” Parker said. “We wanted to let people know there was a better way to do this.”

Parker contacted Rob Vandenabeele, founder of Ecofriendly Beer Drinker, for guidance, and learned Adam Dickens, an Elmhurst candle maker, was also interested in replicating the project here. Parker and Dickens tried to address the problem with a simple solution: build a network of places for the plastic tops to be dropped off, then a smaller network of places to funnel the tops, then find a way to ensure they’re recycled.

Craft for Climate has recruited more than 40 Chicago breweries and beer shops to collect the PakTech holders and take them to four larger collections hubs: Half Acre and Temperance breweries, environmental education nonprofit SCARCE in Addison and Heartland Beverage beer distributor in St. Charles. Finally, the Resource Center, a 47-year-old composting and recycling nonprofit on Chicago’s South Side, picks them up and ensures they’re recycled.

“By keeping them together and getting them to an end buyer, we know it doesn’t end up in the landfill,” Parker said.

Craft for Climate also urges breweries to reuse the tops when possible.

Ken Dunn, founder and president of Resource Center, said the low recycling rate of PakTech plastic reflects “the unfortunate failure of the dominant recycling system.” He estimates a meager 1% of the tops are recycled without such targeted programs. PakTech tops are a small part of a larger problem, but it’s welcome attention for a recycling system that needs reinvention, he said.

“I’m pleased it’s becoming apparent that integrity in recycling is something we need to get back to,” Dunn said.

Parker said he hopes to expand the program to include other wrinkles of beer production, including recycling grain bags.

“I think we’ve only scratched the surface of what’s possible with sustainable beer in Chicago,” he said.

Josh Gilbert, owner of Temperance, said the tops started flooding in as soon as they announced in May they would take them. Even before their receptacle showed up, they’ve filled more than six garbage bags with them.

To entice customers, Temperance is giving away beer: a draft pour matching the height of the stack of tops someone brings in, capped at a 16.9-ounce pint. Other breweries, including Imperial Oak and Midwest Coast, are also offering free beer for bringing in PakTech holders.

On a Tuesday afternoon I brought in my lot, all 147 of them. In exchange, the bartender slid a frosty, easy-drinking cream ale across the bar.

Gilbert pointed out I could have spread out bringing in the plastic holders to get three or four more pints. I told him I didn’t want to be greedy. Above all, I was glad to recycle that plastic.