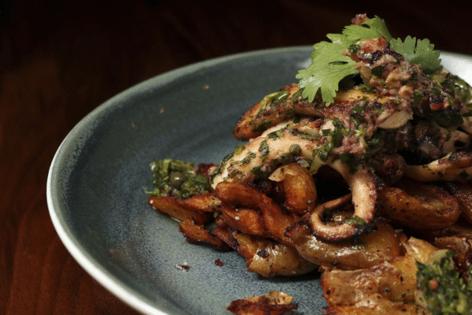 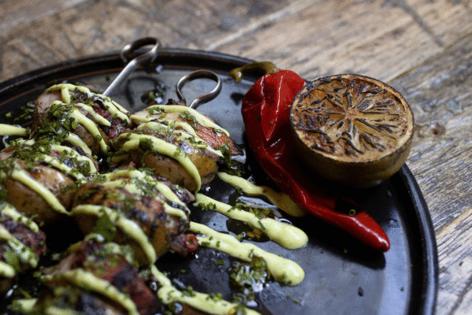 CHICAGO — After digging into the phenomenal grilled octopus skewers at Sueños for my most recent restaurant review, I paused briefly and thought to myself, “Wow, I’ve been eating a lot of octopus lately.”

You can spot the cephalopod at a shocking number of new restaurants. It’s almost strange not to find octopus on new menus. Just in the past year, you can find it at Alpana, Alla Vita, Jibaritos y Mas, Nisos Mediterranean, Lyra, Obelix, Peanut Park Trattoria, Rose Mary and Bazaar Meat. (I’m sure I’m missing places too.)

Not that I’m complaining. Octopus is consistently one of the most enticing offerings on any menu. Gone are the days when you have to worry about tough and chewy tentacles. Instead, the meat is always astonishingly tender, while the edges are crispy and charred. Few foods pick up the aroma of smoke from a grill better.

This is not a surprise to Lee Wolen, chef at Boka and Alla Vita. “Octopus is the new shrimp cocktail,” Wolen said. “I’ve been saying that for years.” He also has the data to back it up. “It’s the No. 1 seller every week at Boka,” he said. Wolen said he just recently discussed eliminating the dish because it’s been on the menu for years, but it’s his favorite thing to eat and customers love it, so it’s sticking around.

Wolen also has an interesting theory about why octopus dishes are becoming a fixture at restaurants. “People love octopus but would never cook it at home,” he said. “You can buy frozen cooked shrimp at most grocery stores, but it takes time to cook octopus. We confit it olive oil for hours, and then grill it.”

Another factor for the rise in popularity might be better access. Doug Psaltis, chef and co-owner of Andros Taverna, believes restaurants can now source much better octopus than they used to be able to. “Octopus has gained popularity because the quality of octopus that’s available right now is unparalleled,” he wrote in an email. “It’s no surprise that more restaurants are offering it, and it’s exciting to see.”

When Andros Taverna opened, its Mediterranean octopus dish received immediate raves, even though it was presented plainly on a plate with little more than a lemon wedge. I was so stunned by the juicy, pork-like texture that I included the dish in my post about the best bites of 2021. At the time, Psaltis explained that he had an “octopus guy” in New York that sourced great octopus from Spain.

Indeed, most chefs I’ve talked to said they get their octopus from Spain, with the occasional mention of Morocco. According to Nisos Mediterranean’s chef, Avgeria Stapaki, the octopuses from Spain are larger and have a texture that customers in Chicago seem to prefer. She said that in Greece, where she is from, octopuses are usually smaller and are subject to a much different process once caught. “In Greece, it’s traditional for the fishermen to hit them a hundred times on the rocks,” she said. “Then they put it in the sun for days so it gets softer, and then they grill it.”

Stapaki says she’s noticed local demand for octopus, but for her, there was never any doubt she’d offer it at Nisos. “For me personally, I have octopus on the menu because it’s in the philosophy and diet of Greece,” she said.

Then again, many people wonder whether we should eat the octopus at all. Much has been made of their remarkable intelligence. In a recently published piece on BBC.com, Martha Henriques writes that there is “growing consensus” in the scientific community that “octopuses are most likely sentient.” Though she does note “imagining an octopus’ inner life is a hard thing to do from our human standpoint.”

Erin Anderssen also recently wrote a piece called “Consider the Octopus” for the Globe and Mail, where she questions whether it is ethical for a Spanish company to open the first commercial octopus farm. She notes that there is a “loud and angry chorus of scientists, environmentalists and philosophers say that octopus farming can’t ethically — or humanely — be done.”

I had my own slight octopus conundrum after watching “My Octopus Teacher” on Netflix, which followed a diver’s interactions with a South African octopus. (In 2021, the movie won an Oscar for Best Documentary Feature.) After it ended, I considered whether or not I should eat such a remarkable creature.

As it happened, the very next day I dined at Andros Taverna and tasted the best octopus I’d ever had. Wherever you stand on eating octopus, there’s no sign that diners in Chicago are anywhere close to slowing down.