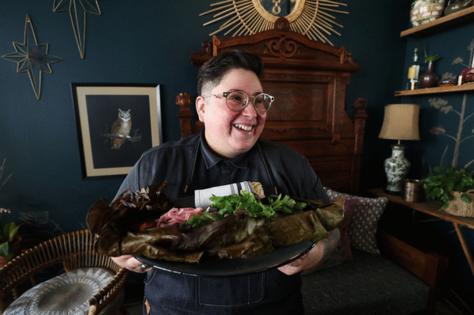 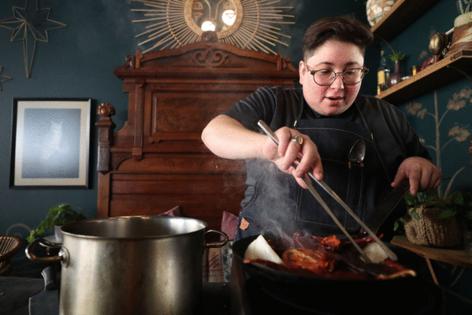 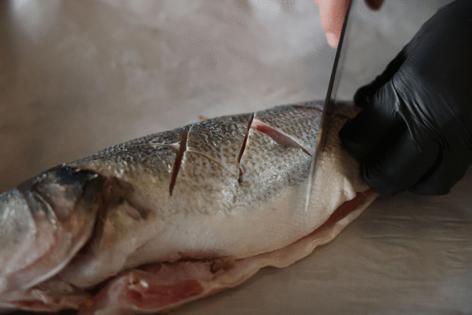 “It’s a special thing,” she says. “You bring it out and drop it on the table and there’s this wow factor — it’s a feast!”

Lopez, whose executive role at Reyes Mezcaleria recently expanded to Chef Partner (likely due in part to showstopper dishes like the banana leaf-wrapped Mediterranean seabass pibil), says it’s a perfect feast for your summer table to boot — lighter and fresher than the pork with which this deep, earthy sauce is often paired — and much easier to cook than its impressive presentation lets on.

Her move into a partner role, too, has been simpler than it might seem, thanks to a cohesive staff, support from the top and a family foundation of hospitality.

“My parents are restaurant owners, so I’ve always had that mentality, treating the restaurant as though it’s mine — my money, my staff, holding myself accountable. And Jason (Chin, of Good Salt Restaurant Group) has always made us feel like we’re owners and partners at every level, so it’s been a simple transition. I feel important as one moving piece of the restaurant, but it takes a million people to run this place.”

It’s also about good relationships, says Lopez, which is something she says also plays into one’s ease in cooking fish at home.

“Step One is knowing your fishmonger,” she notes. “Whether you shop at Publix or Lombardi’s or wherever you choose to go, you should build a relationship with the people who work there and get used to asking questions, ‘Hey, what’s fresh today? What’s in season? What would you recommend?’”

Seafood pros are also extremely knowledgeable when it comes to prep and will be happy to answer questions.

“You can even give them information about the flavor profile you’re looking for. If you’re looking to avoid fatty, don’t get salmon. If you want light and refreshing, you can try halibut, grouper or snapper. They’re also great at pointing you toward things that are Florida-local.”

And though the whole-fish look is supremely impressive (and if you ask me, better, because of that crispy skin and its insulating properties as the flesh cooks inside) you can always opt to prep the below recipe with filets instead. Either way, there are lessons about indigenous Mexican cooking to be learned.

“Everyone knows Mexico City, everyone knows Baja California, and I like focusing on areas that are just as beautiful, that have made impacts on the culture.”

Lopez calls Veracruz “the Italy of Mexico,” in part because of the region’s use of tomato in its cooking, and something that gives her pibil a twist. Instead of pairing vinegar with citrus for a multilayered acidity, she subs in tomato.

“I love the flavor that the char imparts and it gives the dish sweetness and fruitiness along with that acidity and helps with the texture of the sauce.”

Banana leaves offer more than their sensual properties — “an almost herbal, fruity scent,” says Lopez — but gentle insulation from the oven’s searing heat. You’ll find them fresh at many local Asian and Latin markets around the city, “but you can also buy them in the frozen section, too,” says Lopez, who has spied them at Publix on occasion.

“It’s just as good as fresh. You thaw it in the fridge, roll them out and you’re good to go. They’ll be a little wet, but that’s good because it will help steam it — plus it won’t catch on fire.”

Neither will your taste buds. Though puerco pibil and habaneros are best friends, Lopez’s lighter version doesn’t push the heat level.

“This sauce is very flavorful, but approachable. I want to make sure the fish sings, that its flavor really comes through. At the end of the day, we want all the ingredients to be known and tasted.”

On the table, the dish is paired with simple accompaniments: pickled onions, cilantro and rice. Feel free to serve tortillas alongside, as well. There’s no such thing as double carbing in Mexico.

“A tortilla never feels like a carb. It’s a spoon.” jokes Lopez. “Tortillas are silverware!”

One whole 2-3-pound fish of your choice. Ask your fishmonger to scale and gut it. You may also use filets.

Place tomatoes and onion in cast-iron pan over medium-high heat for 3-6 minutes or until charred, adding garlic for last minute or two.

Remove from heat and all other ingredients except honey. Cook ingredients for 15-20 minutes until reduced by half.

Turn off heat and stir in honey. Allow to cool a little.

Place mixture in blender and blend until smooth. Allow to cool.

Season fish of choice with salt and pepper, both sides for filets or inside and out for whole fish. Score exterior (see photo).

Using some of sauce mixture as marinade, coat fish on both sides/inside and out.

Wrap fish in banana leaves and bake in 400-degree Fahrenheit oven for 15 minutes or until internal temperature reaches 135 degrees. With caution, unwrap leaves and add more of sauce mixture. Return fish to oven for 2-4 minutes to achieve a crust.

Serve with pickled onions and cilantro as a garnish, along with a side of your favorite rice and tortillas.