The Kitchn: This will be the most fun snack you’ve ever eaten! 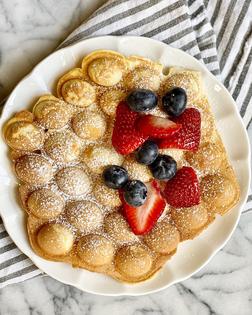 I’m not exaggerating when I say that bubble waffles are the most fun snack I’ve ever eaten. You deserve the same warning I gave my colleague, Lauren, when she told me she was trying these bubble waffles: You’re not going to be able to stop eating them. You’ll want to keep going back for one more bubble. (Spoiler: It will not be just one more bite.)

With soft and spongy, cake-like spheres and a crispy, crunchy web that just might remind you of a cookie, bubble waffles are totally irresistible and incredibly fun to eat. Also known as egg waffles, egg puffs, and puffles, bubble waffles are a popular street food snack that originated in Hong Kong in the 1950s. They’re commonly rolled into a cone and filled with colorful ice cream or whipped cream, but they’re also really delicious (and still totally impressive) served flat with a dusting of powdered sugar and fresh fruit. Or you can just pop them in your mouth one by one. There’s no wrong way to eat them.

What are bubble waffles?

The specific origin of bubble waffles, or gai daan jai, is unclear, but what we do know is that they were first made in Hong Kong after the war, most likely by a thrifty vendor trying to make the most of cracked or broken eggs by turning them into a humble pastry.

These days, there are shops and stands around the world selling bubble waffles, and you can even make them in your own kitchen.

Do I need special equipment to make bubble waffles?

There are a few differences that set bubble waffles apart from American or Belgian-style waffles.

Here, we coat chicken with spices common to Cajun cooking, like dried thyme and cayenne pepper. Then, instead of using the traditional method of searing in a cast-iron pan, we char it on the grill.

These steak tacos are my choice for a small Memorial Day gathering. Chef Hugo Molina shared this recipe with me years ago, and I like to have it in my fridge for last-minute Mexican dishes.

Fire up the grills; Memorial Day weekend fast approaches. We’re gathering outside to sear some steaks and toast summer’s arrival.

When it comes to grilling steak, there are plenty of choices to suit ...Read More

Broccoli florets seem to get all the love, but they stand on the shoulders of strong, sturdy stems that are just as nutritious and delicious as the crown. Broccoli stems also have a subtler flavor and tender heart that are...Read More

It’s been over a month since I first made these plant-based burgers, and since then I’ve lost count of just how many times I’ve made them (it’s been a lot!). They’re juicy and easy and super satisfying, which is ...Read More