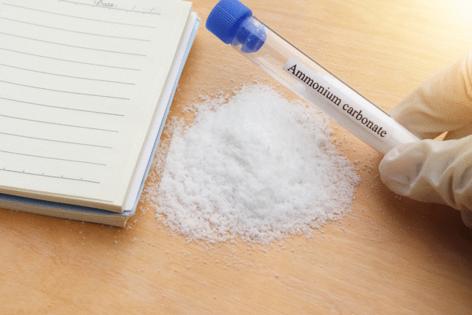 Before there was baking soda or baking powder, there was ammonium carbonate, or “baker’s ammonia.” A couple centuries ago, it was made from the distillation of oil from deer antlers (from whence it was known as, appropriately, “hartshorn”), and was used as a common leavening agent in many European baked goods. Commonly available in drug stores in the past, now it is virtually unheard-of because baking soda and baking powder do just as good of a job leavening cookies, as well as cakes and breads — and without ammonium carbonate’s distinct, well, odor.

Once the chief ingredient in smelling salts, ammonium carbonate has a stench that, if you own a cat, you are very familiar with. (In Marcus Nilsson’s recipe for drömmar, or Swedish dream cookies, in his cookbook, “The Nordic Baking Book” [Phaidon, 2018], he refers to the leavening agent as “piss salt.”) Thankfully, though, ammonium carbonate decomposes when heated into two chemicals: carbon dioxide, which leavens the dough, and ammonia, which dissipates, leaving no aroma behind in the finished product. It works best in cookies and thin crackers where there’s plenty of surface area for the ammonia to dissipate and where an exceedingly crisp texture is desired.

Baker’s ammonia is still available, though, to get that authentic texture in some old-school European baked goods, especially the aforementioned Swedish dream cookies, from which my Eggnog Dreams take their inspiration. The cookies are called dreams because they dissolve quickly in your mouth, thanks to their lighter-than-air texture and honeycomb-like crumb courtesy of the baker’s ammonia.

Ammonium carbonate is available through King Arthur Baking Company and on Amazon, but if you don’t want to go through the trouble of procuring it, you can easily substitute it with baking powder. However, the texture of the finished cookie will be crisp outside and slightly chewy inside as opposed to meltingly brittle and crisp throughout with the baker’s ammonia.

If you’re going to work with baker’s ammonia, though, know that now is the best time since you now own an item that will make handling it more pleasurable: a face mask. Simply put your face mask on and open a window in your kitchen while measuring it and portioning and baking the dough to prevent any malodorous smell from lingering.