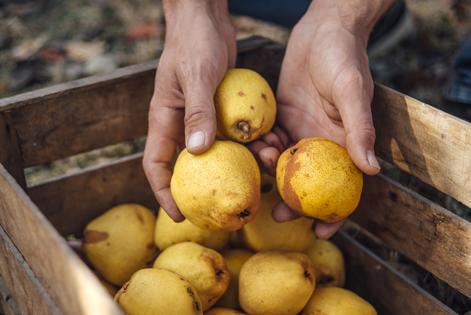 Enjoyed and coveted for thousands of years, pears were one of the gifts to the gods in Homer’s epic poem The Odyssey. The most common varieties of pears were developed in 17th and 18th century Europe where the pear tree became a symbol of longevity and strength. It’s still a European tradition to plant an apple tree when a baby boy is born and a pear tree for a baby girl. Dubbed “butter fruit” for its buttery soft texture, pears are simply incompearable — as tasty as they are nutritious and plump with powerful health-protecting nutrients.

Pears are part of the rose family, kin to apples, peaches, cherries and almonds. The most common pears in the US, which have round bodies and a narrowed neck, are known as European Pears (Pyrus communis). They are related to, but not the same as Asian Pears (Pyrus pyrifolia), which are round with no neck, and are often called apple pears. Of the thousands of varieties, the most familiar include the Bartlett, Anjou, Bosc, and Comice. One medium pear packs 22% DV (DV=Daily Value, based on 2,000 calories/day) of dietary fiber, a winning combination for weight loss and healthy cholesterol levels, 12% DV of the antioxidant vitamin C, as well as other health-protecting antioxidant plant compounds.

Pears rank high among fruits and vegetables as a source of flavonols, such as epicatechin and quercetin, beneficial plant nutrients. Research shows that catechins, one category of these nutrients which occur naturally in pears, may be associated with cardiovascular health by improving risk factors of cardiovascular disease, such as reducing blood pressure (Arteriosclerosis, Thrombosis, and Vascular Biology, 2017). Quercetin has also been shown to be have heartprotective effects (European Journal of Medicinal Chemistry, 2018). When researchers assessed the flavonol content and antioxidant capacity of pears, they found them to be significantly higher in the skin than in the pulp of pears (Oxidative Medicine and Cell Longevity, 2019).

Bartletts kick off the seasonal arrival of fresh pears in late summer, followed by fall-winter pears such as Bosc, and winter pears, such as Anjou. Pears are also available canned, dried, and as juice. Because ripe pears are so perishable, markets usually sell them when they’re firm. Ripen them at room temperature, or refrigerate to keep ripe pears fresh longer. Fall’s cool temperatures are the perfect time to enjoy a poached or baked pear with warming spices, on a grilled cheese sandwich, paired with a soft, aged cheese, or diced with walnuts into a green or fruit salad.

This quick sesame-ginger salmon recipe uses the sauce for both glazing the salmon and tossing with the broccoli. Serve over rice noodles or brown rice tossed with sesame oil and scallions.

It’s rich, it’s festive and it is perfect for holiday brunches. Whether you call this oven-baked French toast or bread pudding, the method is still the same: Dried out bread is soaked in custard and then baked.

There are plenty reasons to add chickpeas to your diet.

Known by so many names around the world — Spanish garbanzo, Italian ceci, Indian gram — the name chickpea comes from “chich pease,” a version ...Read More

By now we all know the history of Funfetti, a rainbow-hued twist on a boxed cake mix, thanks to the folks at Pillsbury way back in 1989. It was revolutionary because instead of using the packet of sprinkles to decorate the...Read More

During Hanukkah there are eight nights of celebrating to do, so it only feels right to have a signature cocktail on hand for any planned or unplanned gatherings that come your way. Make that signature ...Read More

Now that Thanksgiving is behind us, I’m planning out which appetizers I’ll serve over the holidays. An easy recipe that can be pulled off in a few simple steps are these stuffed dates. The dates are ...Read More