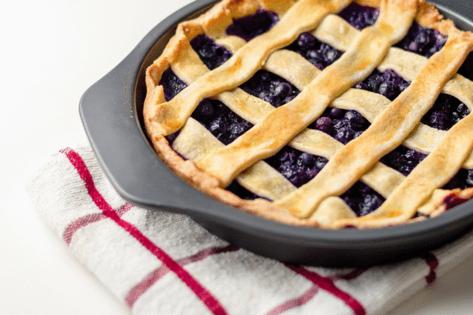 Times change and so do attitudes. If we were around in 1883 and reading the Union Signal newspaper, we would have been alerted to the moral, ethical and spiritual dangers of — pie.

For 70 years, the Union Signal was the weekly national newspaper of the Women’s Christian Temperance Union, an organization that is still active today, by the way. I stumbled upon a reference to the anti-pie essay in an article in a December 1883, edition of Good Health magazine, which published some of the loonier ideas of cereal magnate and genuine nutcase J.H. Kellogg.

According to the writer of the piece in the Union Signal, pie is the first step on the road to sin and degradation.

Here is the logic, or what passed for logic at the time:

Our writer visits a typical American home of the time on baking day, when fresh-baked pies rest along the shelf, along with a few cakes.

“They certainly look innocent enough,” the narrator says, but that is before we know the true dangers that lurk within their flaky crusts and fruit fillings.

“As we stand in our neighbor’s pantry, we do unhesitatingly assert that in those numerous pies we find an enemy to temperance principles.”

Some pies of the time actually had alcohol in them, such as mince pies made with brandy, but those are not the article’s subjects. Such pies obviously have no place in a household that eschews strong drink. The problem is far more insidious than that.

For this tale of demon pie, the writer creates a representative American lad named Johnny. “From his cradle, Johnnie’s staple article of food is pie. It is pie for breakfast, pie for dinner, and pie for supper, while Johnnie as the baby, has the left-over pieces between meals.”

That sounds unlikely now, but who knows? Perhaps in 1883 people did stick to the all-pie diet. The hypothetical Johnnie did, with terrible consequences: “The once rosy cheeks of the boy have taken on a pallor that can be likened to nothing more appropriately than, his mother’s pie crust. His digestive organs have ground away on pie till a mutiny has sprung up, and the poor child is in terrible distress.”

The doctor would see him and diagnose Johnnie’s probably as chronic dyspepsia, which is to say indigestion.

What’s a poor mother to do? Obviously, she will go to the apothecary to procure a tonic of some sort to relieve her boy’s pain. Neighbors would have suggested remedies to her, and nearly all of them would have involved bitters.

Johnnie would go to the store and “buy a great bottle of bitters, possibly Hostetter’s.”

A brief digression — call it a digestion digression. Dr. J. Hostetter’s Celebrated Stomach Bitters were the best-selling bitters in the country throughout the second half of the 1800s. During the Civil War, they were sold to Union soldiers as “a positive protective against the fatal maladies of the Southern swamps and the poisonous tendency of the impure rivers and bayous.”

They were also 47% alcohol. That’s stronger than most bourbon.

Poor Johnnie will only find relief from the bitters for a few days, the story continues, and then will begin to console himself with alcohol without the bitters. From there, “his downward course is short.

“His heart-broken mother wonders why her boy would turn out to be such a drunkard. … She does not see the steps from improper food to dyspepsia, from dyspepsia to bad medicine, and from thence to strong drink.”

The story is tragic, but the logic is irrefutable: Eating pie will inevitably turn you into a raging alcoholic.

This gluten-free, vegan version of peanut noodles has a high protein content thanks to edamame and peanut butter. Spaghetti squash turns delicately sweet when roasted, which pairs wonderfully with the Thai-inspired peanut ...Read More

Kary Osmond will not file a recipe for the 9/20/21 Entree package.

While others sing the praises of kale, I am a big Swiss chard fan. I find it has a mild, sweeter flavor than other greens. And it’s versatile: I’ll add it to pasta, risotto and soup, and I’ll saute it or braise it ...Read More

It’s always fun to open up my grandma’s recipe box to find the perfect dish handwritten on an index card. And her classic applesauce cake jumped out at me as the ideal treat for fall. It’s made with all the warm ...Read More

Some appetizers seem to disappear more quickly than others. Take bacon-wrapped shrimp, for example: If it’s on the table, it’s almost guaranteed that it’ll be the first to go. They’re just irresistible. Play around...Read More